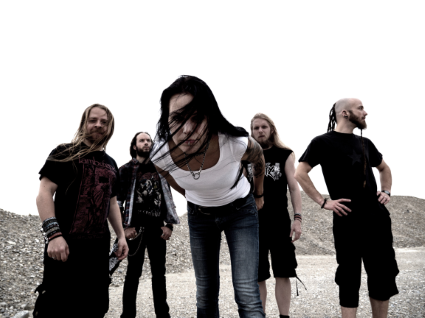 German band released an album last year. And have toured with Onslaught. Good enough for us to feature them, then

Hannover, Germany’s Cripper have been converting fans to their cause with their riveting mix of old school and modern thrash metal since their inception in 2005. The band’s accomplisedh technical refinement, along with a healthy serving of groove, makes for a diverse and distinct listening experience. The guys and gal from Hanover, Germany have already made their impression as a rousing live band, and will look to continue to do so in support of their new album, “Hyena.” Previously fans have seen Cripper on tour with Overkill and Onslaught, in addition to repeat performances at major European festivals: Summer Breeze, Wacken Rocks, Metalfest, and Rockharz Open Air.

But there’s even more – Cripper has been on board the immensely popular 70,000 Tons Of Metal cruise ship from Miami twice. They’ve also played the Brutal Assault festival in the Czech Republic, Bang Your Head in Belgium, the Netherlands, Poland, Austria, Switzerland, and they have been invited to perform at the Slovenian Metaldays 5 times!Cripper has put in the time and miles to garner a strong international reputation along with an ever expanding fanbase.

After having been exposed to Cripper at Metaldays 2013, Metal Blade Records signed the vibrant and highly motivated self sufficient group of musicians. The band’s creativity is always on display through in three different aspects:  album artwork, merchandise, and (so far) four complex, and entirely self-produced music video productions.

“Hyena,” Cripper‘s fourth studio album, is 11 tracks that each exemplifies the band’s unique flavor. The band would describe this album as overall much more heavy than previous works, and with a different, more transparent sound concept. “Hyena” stands as an album that’s of special signifigance for the band. It’s their first with Metal Blade, and with the label’s global reach, they stand to further broaden their horizons and continue to grow to become one of metal’s finest up and coming acts on the planet.