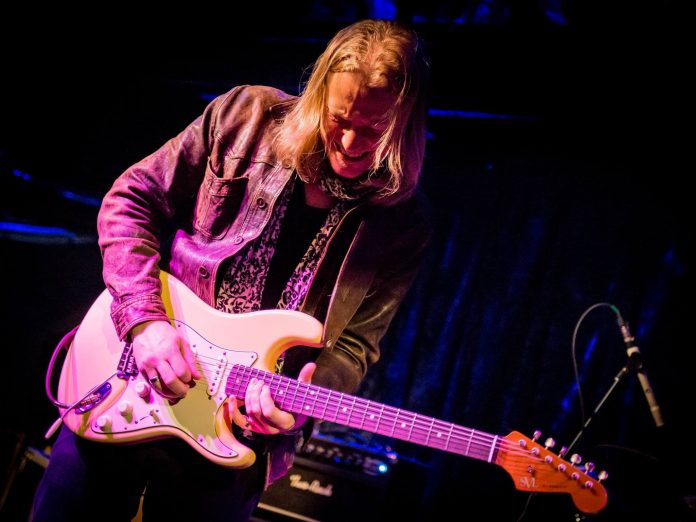 England’s finest bluesman? Schofield competes with the raffle to prove it in the Cathedral City

The glorious architecture at the Guildhall, with its high ceilings, Tudor beams and ornate stained glass windows, is a refreshing change to the sticky floored dives you usually see live music in on a Friday night. Indeed, in the build up to the show Matt Schofield has called this beautiful little room in Staffordshire his “favourite venue in the country.”

The man himself is lauded in the right circles throughout the land himself and there is a moment, about 20 minutes into this show, when all the adulation makes complete sense.

Matt Schofield and the two other men that make up this return of trio band – Evan Jenkins and Jonny Henderson – are playing the mournful “The Day You Left” from Schofield’s “Far As I Can See” album from last year. The guitarist has just launched into a brilliant solo and suddenly, right there and then, you can see why this man has won guitarist of the year three times on the trot.

Like all the best players, what he does looks so natural and effortless that he makes the blues seem like the most natural and primal thing in the world.

The truth, would if you delved deeper, no doubt be somewhat different, but the three on stage here pull it off with ease.

The songs are picked out by some wonderful, swirling Hammond organ from Henderson, “Everything” sounding particularly impressive. If those two tracks are new, then the set is very much a career spanning effort. Schofield is experienced enough to have been doing this for getting on for 20 years and is eager to show off his considerable talent. Or as he puts it “we are going to be playing all the hits for you tonight.”

Not that titles matter. This is instead one of those gigs where songs wander off wherever they want, and some of those tangents are thrilling.

A show split into two halves (bizarrely there’s also a raffle….) when the band return they soon have people – literally – dancing in the aisles.

The ebullient groove of “Shipwrecked” sees things get funky, and there is some playing in the hour that follows that verges on the incredible. The latest album’s title cut really cuts lose, becoming almost hedonistic.

There appears to be little ego here, for although Schofield is very much the star here, he leaves the stage allow Jenkins and Henderson to jam superbly.

The encore of “Once In A While” is best summed up as timeless, classic blues and the boogie shuffle of “Troublemaker” which ends things tonight is made for the barroom off Beale St in New Orleans.

In this setting there is little need for fanfare. Three men with total mastery of their craft makes up for all the fancy light shows in the world.  But then, the beauty of the blues it’s truly a genre where the music does all the talking. Tonight it spoke very eloquently indeed.