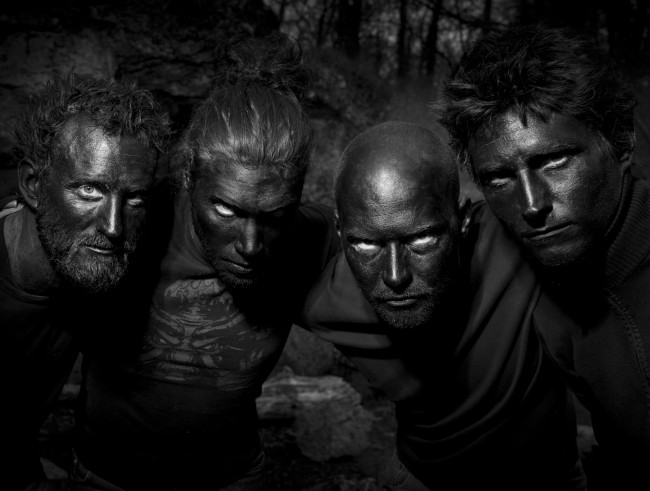 With Abrahma about to release their new album on May 12, here’s the lowdown on the French heavy psychers

Forcefully ascending from the depths of Paris rock underground, it only took ABRAHMA one album to emerge as one of the torchbearers of French heavy rock on the international scene.

Released in late 2012 on renowned North American label Small Stone Records, “Through the Dusty Paths of Our Lives” unveiled an incredibly mature songwriting, while showcasing the band’s sombre and complex music realm.

Like the main thread of this heavy odyssey peppered with Hindu mysticism and voodoo convolutions, the sound is hulking and hypnotic, while vocals resound like a distant and irresistible incantation; an appeal that is amped-up by guest appearances from the likes of Ed Mundell (Monster Magnet) and Thomas Bellier (Blaak Heat Shujaa, Spindrift).

In 2013 and 2014, the band successively hit the stages of Desertfest London, Freak Valley Festival (De) and Mudfest (NL), and toured Europe with Enos as well as labelmates Wo-Fat. With this first full-length, ABRAHMA laid the foundations of their peculiar stoner aura adorned with the darkest riffage of the Seattle sound, and drew the attention of the international press. 2015 will see the Parisian foursome release their second album to date, due out this spring on Small Stone Records.

The quizzically-titled Reflections in the Bowels of a Bird arrives to further the sense of ritual in ABRAHMA’s sound. Songs heave with psychedelic fervor but also dig deeper into an influence from the early ‘90s Seattle rock scene, groups like Soundgarden and Alice in Chains.

One can hear their impact in the slow roll of a song like “An Offspring to the Wolves,” while elsewhere, “Omens Pt. 3” opens up to spacious riffing and a tripped-out feel. What makes ABRAHMA work so well, though, is that no matter where they go sound-wise, they never lose sight of their songwriting, guitarist/vocalist Seb Bismuth, guitarist Nicolas Heller, bassist Guillaume Colin and drummer Benjamin Colin making memorable, structured material out of an ether of effects swirl and echo.

As they did for Through the Dusty Paths of Our Lives, ABRAHMA will hit the road hard in Europe for Reflections in the Bowels of a Bird, touring alongside Egypt and Lo-Pan in Spring 2015, making their debut at Roadburn in the Netherlands and bringing their well-honed psychedelic heavy rock to Germany, Spain, Italy and more as they continue to build their fanbase across the continent, with an eye always looking forward to more expansion to come.