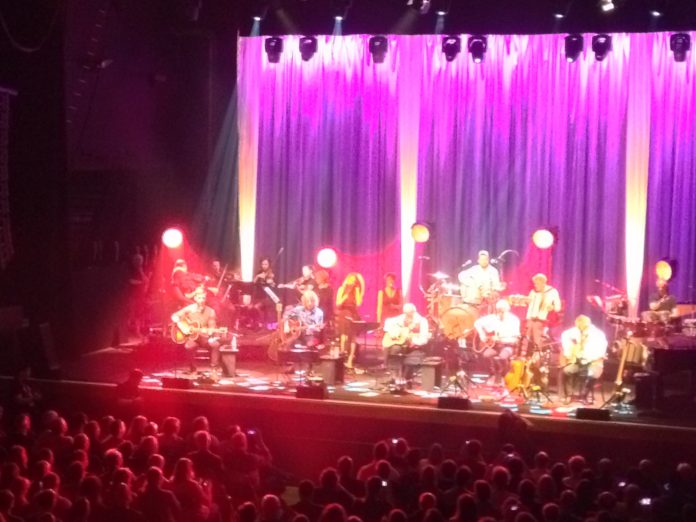 Francis and the chaps show their other side

“You ready?” Enquires Francis Rossi. The legendary frontman of the legendary Status Quo has just – along with his bandmates – strolled out onto the Civic Hall stage, and well over 2000 people have just gone crazy.

“You Ready?” The mere mention of those words has caused screams. Surveying the scene the singer deadpans: “I was talking to the band, not you.”

With that it’s all systems go.

As always, these spring shows are a little different from the by now ubiquitous Quo Christmas run. The last two years has seen them join up with their original line up for a 70’s inspired show. This? Well, this is an acoustic tour. Kind off.

Last year the boys released an album called “Aquostic – Stripped Bare” which contained some fine re-workings of some fine songs. This has grown into a full-length jaunt, seemingly just for grins.

However calling this an acoustic gig is to rather miss the point. Acoustic gigs do not, generally, have a classical sextet, nor do they posses an accordion player, a drummer, a percussionist, a Grand Piano and two backing singers. In all there are 16 musicians on the stage. The last time this many people was in one place was the cast of “Ghandi” or at the very least Guns N Roses on the Use Your Illusion tour. Stripped bare indeed. No wonder Francis asked if they were ready, he probably needed a roll-call.

But cast of thousands or not, the sound is perfect, and the strings in particular adds to the sound wonderfully. There are some quite fabulous versions of some quite fabulous songs for 90 odd minutes. “And It’s Better Now” sets the tone, and “Again And Again” follows the path superbly in the early stages.

What often gets forgotten about Quo is that in their back pockets they have some of the finest rock n roll boogie songs ever written, and standards like “Paper Plane,” “Caroline” and “Rain” would be hard to make bad whichever way you did them.

But best of all is the glorious hippy-dippy psychedelica of “Pictures Of Matchstick Men” which utilises the classical musicians talent spectacularly, while “Down Down” shorn of its power chords works surprisingly well.

After “Rockin’ All Over The World” (what else?) ends the set, there’s an encore. “Rock Till You Drop” is understated, but the opposite is true of “Burning Bridges” which has people literally dancing in the seats.

There’s a reason people keep coming back to watch Status Quo. It is – like the bands music – staggeringly simple: Status Quo are one of the finest rock bands this country has ever produced. So familiar are the songs, and the people that sing them, that even though fans don’t know them personally, the band feel like old friends. Rossi, for example, manages to talk to upwards of 2000 people like they are sat in his living room.

Here, tonight, there is a tremendous warmth about the show and there is tremendous talent playing the music. Status Quo are an institution for a reason.