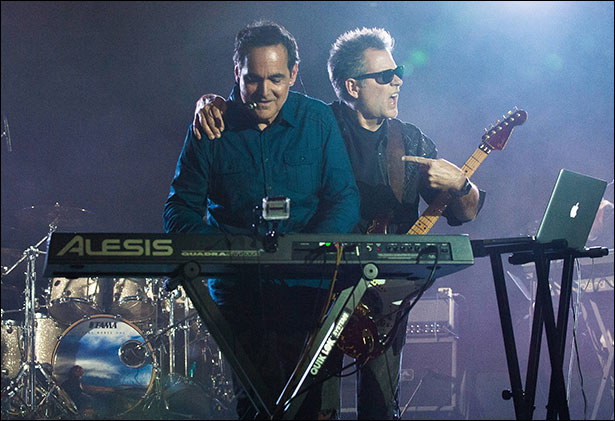 With the announcement last week of a new live album, it seems like we should make the ex-Spock’s Beard man today’s Featured Artist

Neal Morse’s career path is full of unexpected twists and turns, sudden changes and pleasant surprises—much like the epic progressive rock compositions for which he has become known. In 2014 Neal was remarkably prolific, marking milestones both in the studio and on the road with the multiple bands he’s a part of.

Transatlantic supported the album with 27 stops across the globe, including a few unforgettable ship performances as part of the Progressive Nation at Sea cruise, where on one special night the band backed original Yes vocalist Jon Anderson for a handful of classic Yes renditions. The highly successful tour was filmed, recorded and documented in three formats as KaLIVEoscope (available as Ltd. Edition 2DVD+3CD+BluRay Box Set | DVD+3CD Special Edition Digipak | standalone BluRay).

In between Transatlantic’s studio and live recordings, Morse released Songs From November, a “singer-songwriter ‘feel good’ album” full of strong melodies and powerfully personal stories. It was a hard right turn from the progressive leanings of Transatlantic, but nonetheless well received and reviewed by those open to a more stripped down, direct approach to melody.

It all began in the mid ‘90s when he formed the quirky band Spock’s Beard, whose debut, The Light, was an unexpected success. Over the next 7 years, Spock’s Beard released 6 critically acclaimed studio recordings and multiple live recordings while establishing a passionate fan base in the “prog rock” community.

Following the release of Spock’s Beard’s 2CD concept work, Snow (a fan favourite), Morse shocked his followers with word he was stepping away from music…with no indication of where he was heading. In his steady journey toward commercial and critical acclaim, he was still searching for inner peace. After months of resistance, Neal could no longer ignore the calling he felt to lay down his music, at least temporarily, to pursue whatever God had for him. Standing by his convictions, he urged Spock’s Beard to move forward without him.

After a respite from Spock’s Beard, he eventually sensed God moving him to write again. This time the music was an inspired soundtrack of his faith journey—a double disc musical retelling of his Testimony. The unique and ambitious record spans numerous styles of music and features orchestral movements, gospel strains and signature progressive rock contributions from Portnoy and former Kansas mastermind Kerry Livgren.

After reaching success with Spock’s Beard, he was now starting over again, this time boldly declaring his faith and risking fan rejection and financial failure. He needn’t have worried. As the Testimony Live DVD triumphantly documented, his solo tour was full of magical moments and was a deeply affirming experience. Britain’s Classic Rock Magazine included Morse in their “100 Greatest Frontmen of Rock” listing, while the Dutch Progressive website DPRP awarded it the “Best Rock Tour” over such legendary artists as Peter Gabriel, Radiohead, Rush and others.

Morse returned to the studio with Portnoy and touring bass player Randy George to record 2004’s One, a conceptual album that explored the biblical themes of separation and reunion with God and featured fiery fretwork by Phil Keaggy.

In 2005, they recorded “?,” another artistic concept exploring themes of alters, temples and the dwelling of the spirit of God. Even those wary of Morse’s spiritual commitment had difficulty resisting the addictive hooks and melodies of “?,” and the guest contributions of Jordan Rudess (Dream Theater), Roine Stolt and Steve Hackett (Genesis). Morse assembled a completely new band of Europeans players who brought youthful exuberance to his live show and the energy and excitement was captured on 2007’s Question Live CD.

Morse’s 2007 studio release, Sola Scriptura turned the spotlight on some of the church’s historical shortcomings when man placed himself before God, striking out into more aggressive musical territory. While exposing certain abuses, the ultimate point of the record was to call the church back to a purer state. The ensuing tour was captured on 2008’s majestic 2 DVD Sola Scriptura & Beyond (which featured stunning guitar work from Paul Bielatowicz).

Morse, Portnoy and George returned to the studio for the non-conceptual, song-oriented “Lifeline” in 2008. Once again he embarked on a tour featuring his European band stretching out and covering more material from Spock’s Beard, Transatlantic and as well as his latest solo material. Released in 2009, the triple CD “So Many Roads” chronicled the live performances.

Although fans were warmly embracing Neal’s solo output, many held out hope that the Transatlantic blimp would fly again someday. In 2009, their dream became reality as the four regrouped to morph Neal’s demo, “The Whirlwind” into a new team composition. It became their highest charting album to date, and in 2010, Transatlantic embarked on their biggest tour yet, with dates in 11 nations across Europe and North America. The impressive and successful tour was immortalized in the double-live DVD,Whirld Tour 2010 and massive 3CD/2DVD box set “More Never Is Enough.”

In 2011, Morse, Portnoy and George also recorded the double disc sequel “Testimony 2.” The highly praised release included guest appearances by old Spock’s Beard band mates and some clever musical reprises that respectfully give a nod to the originalTestimony material. Morse played in the U.S. and overseas to wildly enthusiastic crowds who reviled to see most of the original Testimony tour band playing together again. The ensuing Testimony 2: Live in Los Angeles 3CD/2DVD box set reveals the joy and spirit of that tour.

During this busy time Morse released Sing It High, a songbook featuring 15 songs written out with melody lines, lyrics and chords, and also self-published his autobiography, Testimony, which revealed the albums’ back story and fleshed out more personal details of his spiritual journey from frustration and despair to hope and joy.

Morse began working in 2011 with another supergroup, this one decidedly more pop than prog. Along with Portnoy, it featured the legendary axe man Steve Morse, bassist Dave Larue and a relatively unknown singer/songwriter named Casey McPherson. Flying Colors’ self-titled debut surfaced in 2012, garnering sweeping praise with support by a brief tour in September. Flying Colors Live in Europe emerged in 2013, capturing the brief but bright run of shows they played.

Morse reconvened with Portnoy, George and friends to record 2012’s Momentum, featuring blistering guitar work by Paul Gilbert and contributions from his new touring band assembled through a fascinating YouTube audition process. The hand-picked new ensemble delivered jaw-dropping performances with an invigorating spirit, making theMomentum tour an undisputed success that was preserved on video with the 2DVD/3CD box set, Live Momentum. Due to demand, a BluRay edition was soon released.

In 2014 Morse decided to do a two-day festival at his home church. The festivals name, created by long-time friend, Mike Portnoy, was [Morse]fest. Morse, Portnoy, George along with new comers Eric Gillette, Bill Hubauer, and a slew of special guests performed Testimony on night one and the One album on night two. This was the first time that the One album had been performed live in its entirety. This unique event included special opportunities for personal interaction with the band and stellar performances of the two classic releases that launched Morse’s solo career.

Just after revisiting the past at [Morse]fest 2014, Morse and his band began working on the first Neal Morse Band collaboration. In 2015 they released their first project, The Grand Experiment. This album was different for Morse. He wanted to work together with the band, so he came to the studio with NOTHING! Morse said, “I made a lot of room for the other guys to create and express themselves and the result is outstanding! We wanted to experiment, do something different, and see what everyone is capable of….we found out…in SPADES!” In support of their smashing release, the band headed out on a world tour titled, the ‘Alive Again’ tour, and as it proved to be an amazing success, the band has a follow-up summer tour planned for July.

September 2014 also brought the long awaited release of Second Nature, the sophomore studio release from Flying Colors. Reviewers raved the follow up was even stronger and slightly more progressive than the debut.

Morse will release [Morse]fest 2014, The Testimony and One Albums Live August 21st in America and Europe. And as the 2014 [Morse]fest was such a raging success, a [Morse]fest 2015 is now in the works to be held September 4th – 5th. For [Morse]fest 2015, the band and special guests will join Neal again, this time to perform his “?” andSola Scriptura albums.

To the delight of his passionate and growing fan base, there seems to be no end in sight for the innovative, masterful musicianship that flows from Neal Morse.