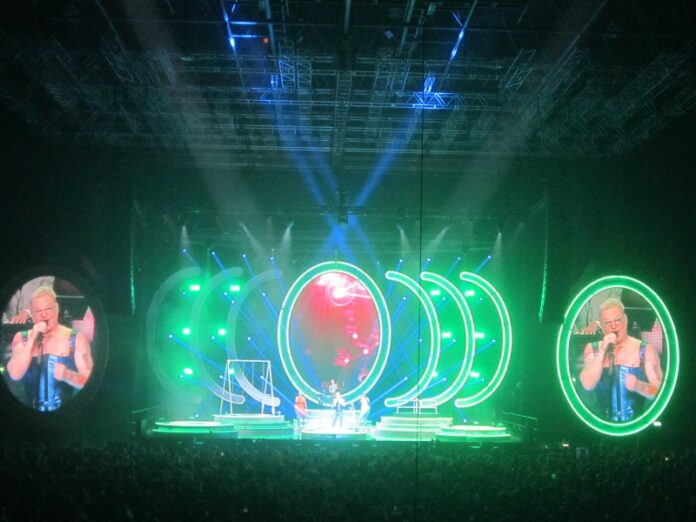 Erasure are one of those bands that i`m sure everyone knows but won`t admit that they know at the very least one of their songs, they`ve been making music since the mid-eighties and have had more than thirty UK Top 40 hits. This Synth pop duo Andy Bell with his expressive voice and extravagant stage persona and Vince Clarke the laid back and almost expressionless character produce the sort of music that I would tend to turn to, when I feel the need to lift my spirits. The Neon Tour 2021 & 2022 in support of last years eighteenth studio album arrives in Birmingham tonight and after a warmup DJ set from Wayne G, the lights dim and the theme tune to late sixties children`s tv programme Joe 90 is pumped through the pa.

We blink and there are Andy Bell in a blue Basque with bluish tartan like trousers and Vince Clarke looking resplendent dressed in a suit that makes him look like a Bank Manager with the wonderful backing singers Emma Whittle and Valerie Chalmers belting out the techno anthem `Chorus` before they share a track off the latest album with `Hey Now (Think I Got A Feeling)`, a pulsating dance offering with wonderful teasing synth beats and the line of “Hey Now, Hey Now, Think I`ve Got A Feeling” reiterated throughout to underline the sentiment. A song that would stand happily with the band`s previous classics.

The show moves on at pace with `Fill Us With Fire`, `Sacred`, `The Circus` before what I’d call one of the bangers arrives with the wonderful `Who Needs Love Like That`, the debut single written about a destructive relationship and this packed arena erupts in a mass of energetic dancing bodies.

Andy shares that Vince visited him in his dressing room before the show and complimented him on the delightful smell to which Andy had to confess was Ralgex muscle rub cream. Another cut from `Neon` comes with the throbbing `Nerves Of Steel` which is followed by the uplifting `Blue Savannah` which again sends this faithful audience into a frenzy.

We have the high energy `Chains Of Love` and the introspective `Turns The Love To Anger` before another track from the latest album with the hypnotic and uplifting `Careful What I Try To Do`. Probably my favourite number follows with the captivating up tempo, dance-oriented pop tune `Sometimes` a number that you just can`t sit still to. The bouncy `Save Me Darling`, quite retro `Shot A Satellite` and thumping `Love To Hate You` get an airing before there`s a cover of The Eurythmics `Love Is A Stranger` which works so well. We also have Vince theatrically cutting Andy out of his Basque which is replaced with a yellow t shirt with a smiling primate on the front.

The home straight has the dance floor filler `Drama!`, the larger than life ballad `Always`, mesmerising `Push Me Shove Me` and `Victim Of Love` with the infectious energetic `Stop! ` sandwiched in between.

It doesn`t take too long before they return to the stage for a two song encore with the heart breaking but danceable `Oh L`amour` and the stunning `A Little Respect` which has near enough everybody in the arena on their feet.

Tonight`s show was a dip into the past and also a window into what the future holds for this duo and we were taken on a roller coaster ride of high energy thrills and more reflective and contemplative delights along this one hundred minute experience. Andy still retains that soulful voice and flamboyant stage persona but having had both hips replaced, we can forgive him for not bouncing around the stage as he one did. Vince was his usual low key and laid back self but the magic from both is still there. This is a long tour with a dozen dates in the UK before they head to North America early in the new year for twenty six dates and then a further seven dates in Europe. It`s a quite glitzy Las Vegas affair at times which is to be expected as the album is called `Neon` but if you get the opportunity, grab it with both hands, it`s a fluorescent and glowing show.