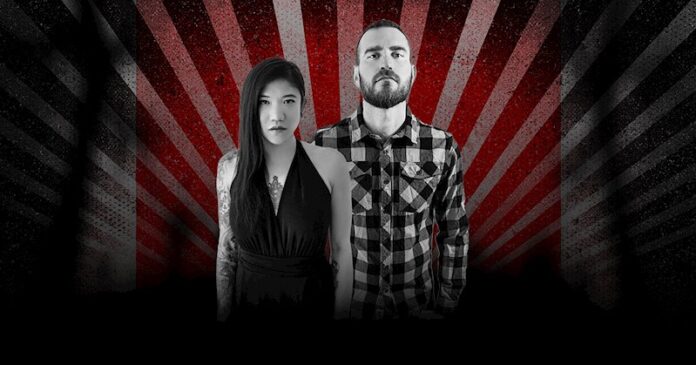 THE CHRONICLES OF MANIMAL AND SAMARA are an exciting and genre-defying duo blessed with glaring talent and true imagination. The alternative twosome have just revealed their thought provoking and powerful new single, Count The Dead . The band will also set loose a visually striking accompanying video on Monday 18th October.

Although THE CHRONICLES OF MANIMAL AND SAMARA (TCOMAS) are now rooted in London, the origins of the group are gloriously diverse: Daphne Ang (Vocals, Piano, Keyboard) hails from Singapore, and Andrea Papi (Guitar, Bass, Vocals) was born and raised in Italy. Pulling inspiration from many sources stemming from Devin Townsend and Tool through to Kraftwerk and Russian Circles, as well as absorbing the poetry of Virginia Woolf and Jim Morrison, TCOMAS admirably strive to fill a gap in music by bringing literature and history together into an arena where rock and metal meets electronica.

Since their inception at the start of 2020, TCOMAS have managed to establish themselves as an impressive collaborative. To date, the duo have successfully produced seven very well received music videos and singles, as well as unveiling their breath-taking debut album, Full Spectrum. The band’s previous single, Love in the Time of Pestilence, also graced many playlists including Spotify official playlist: Progressive Metal and The oTHERS.

The industrious pair are already laying down plans for their sophomore album, which is due to arrive in 2022. The record is an invigorating expression of sheer outrage enflamed by the current global crisis. The new album reveals a more aggressive side of the band. Recorded this year at TCOMAS’ studio in Camden Town, London, the record is loaded with politically charged and satirical themes with lyrical content petitioning listeners to open their eyes to the grim realities of modern society and the darkness of human nature. Indicative of the duo’s incoming album, TCOMAS’s new single, Count The Dead, is a stark and brutal attack against world leaders and their gross neglect.  With a raft of potent singles and powerful videos on the way, along with the band’s anticipated new album, THE CHRONICLES OF MANIMAL AND SAMARA are on course to make colossal waves.