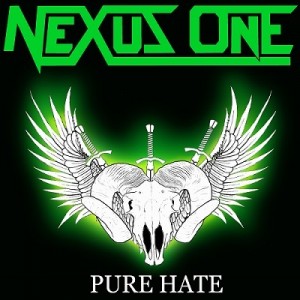 About five years ago there appeared to be a new Thrash revival.  Taking the spirit and intensity of the genre’s forefathers (Slayer, Anthrax, Metallica etc) a new wave of musically aggressive young oiks climbed the Metal tree and forged a new branch that had it roots back in the early 1980’s.

UK bands in particular were thrust to the fore.  Huddersfield heroes Evile became the most prominent and are still going strong.  However, the general consensus has been over the last 18 months or so that the revival is to be short-lived.  If that is the case then nobody told Yorkshire Thrashers Nexus One.

Like the aforementioned thrashers this four-piece hail from Northern part of England, not a millions miles from their contemparies.  The similarities don’t stop there either as the spit and grill of Evile’s “Enter The Grave” debut album can be felt in this five-track EP.

Formed in the wilds of Whitby, North Yorkshire in 2012 by guitarist Dan Sutherland and vocalist/bassist Harry Harrison the band bonded over a love for all things metal but they shared a keen interest in Thrash and a desire to push the genre forward.  No surprise then that that is where their musically union has led.  It wasn’t long before the duo became a quartet as lead guitarist Sam Dossor and drummer Ace Carlton were recruited to complete the band.

“15 Minutes of Shame” is the opener and it flies out of the traps at the expected pace.  The vocals are harsh and occasionally raw but clear, which all adds to the appeal of the track, which itself is a old Exodus-like rant at the culture of celebrity.

Tracks like “Gods of War” and “The Nightmare is my Life” offer the kind of thrash that we have come to expect from seasoned veterans nevermind young whippersnappers.  It’s fast, it’s heavy and ticks every box a Slayer or Testament fan could dream up.  There are shades of modern bands such as Machine Head that provide an occasional and welcome diversion from the standard format.

The guitar work across all tracks wouldn’t be out of place on any classic early 1980’s release.  The leads in particular bristle with energy and vitality.  Similarly the vocals are powerful and  bristling with menace.  As you might expect the rhythm section is tighter than a gnat’s chuff and is the driving force of the band’s sound.

“Watch You Die” delivers on building the momentum before leaving you feeling brutalised, but with a smile on your face,  by the end.

Overall this band have the makings of something very special.  There are many young bands of a similar ilk that are floating around.  All with great intentions and almost limitless abilities but every now and again a band comes along that stops you in your tracks and confirms that the future of “our” music is assured.

If this is the first time you have heard of Nexus One, I guarantee it won’t be the last. Listen to their EP for free at http://www.reverbnation.com/nexusone then drop me an email or message to tell me I’m right!!