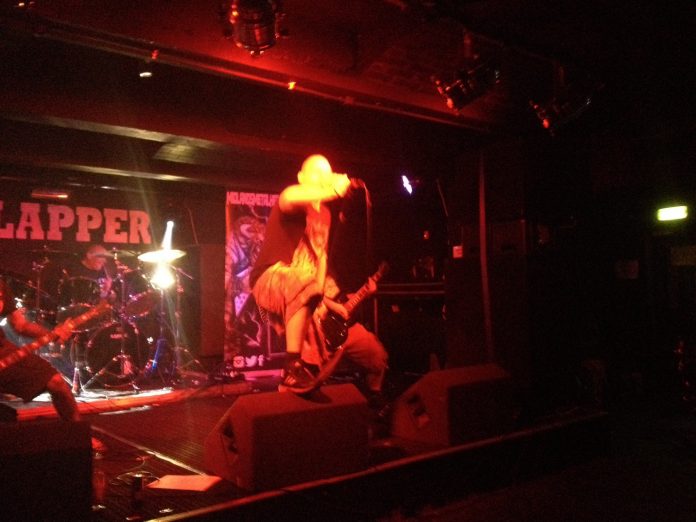 A BRILLIANT EVENING OF STONER ROCK IN BIRMINGHAM

“Born from when molten lava meets the cool air” is the opening phrase on their Facebook page, while their last song is called “The Surfer Wolves From Outer Space”. That alone should convince you that if you have a night of stoner/doom metal planned, then you could do a lot worse than get Shebrew to open the thing. The local three piece were born for such a job it seems. Their bass heavy groove threatens to shake the foundations, while Francis Anthony on guitar and vocals wails over the top. “What’s wrong with me?” He sings at one point. Pretty much nothing, should be the response. Despite Shebrew sounding something akin to Karma To Burn with vocals, someone in the crowd shouts out “more riffs.” Damn near impossible, as the evening gets off to a rollicking start.

“Good evening people of Birmingham, we are Smiths tribute band called I’m A Miserable Bastard and these are my miserable friends.” So says Eyes Of The Raven singer when “hello” would have done. But then EOTR were never ones to take themselves too seriously. What they do manage to do each time we see them anyway, is be very, very good indeed. “Let’s Do Blasphemy” which is helpfully dedicated to “churchgoers, homophobes and racist pricks,” rolls along like prime Orange Goblin, while “Bury Your Demons” is heavier and faster, with a huge wall of guitar. They find time to give us a new track “Five Year Winter” which bodes extremely well for the forthcoming album and a smile is never too far away as Raven fly through (do you see what we did there?) their half an hour. All those downbeat bands who treat playing metal like it’s a chore, Eyes Of The Raven are here to show you why you are wrong.

The last time MV clapped eyes on Lifer it was at Bloodstock 2013. If we recall, coming after them onto the Sophie stage were some glam chancers. That day the South Wales mob had essentially made what followed appear to be weak and anodyne. Tonight, faced with a bill of like-minded bands, in the city that invented this type of music (face facts everywhere else in the world!) they merely just leave their size 12’s over everyone’s face, having administered an almighty kicking. Appropriately for a band that takes it’s name from a track on Down’s first album – and even though they are a four piece tonight – Lifer are enormously heavy. Scriv on vocals stands with his foot on the monitor ready, it seems, to attack, while the fantastically bearded Sam Jones on bass seems like the journey up here just massively pissed him off. “Bang your heads” screams Scriv before the band hurtle into “Goathead” and for all the world it’s like being in the Louisiana swamps rather than the basement of a pub in Birmingham sandwiched between the NIA and a canal. “Embrace The Madness” is perhaps best of all, with it’s urgency mixed with low tuned groove to brilliant effect, while “Long Time Dead” is so downright abrasive it could sandpaper the walls, but the entire set is nothing more than a triumph.

Baron Greenback singer Max has things on his mind: “Thanks to all the other bands for making us look awful,” he says. “We can do that ourselves…..” It’s a neat line in self-deprecation, because he and the rest of BG are worthy closers. Slightly slower than Lifer, instead they go for a more crushing effect to their bludgeon, as bass player Rooster (a man who’s pint has remained unspilt most of his life we’d suggest) and guitarist Mike are to the fore. A barefoot Max headbangs his way through a set with perhaps a little more diversity than some of what we’ve seen. All this does, though, is make the heavy bits seem heavier – and make no mistake some of the riffs here could rattle teeth. A band of few words, but many superb songs it seems, this bunch of Midlander’s – completed by Si on drums – need not worry about being made to look bad by anyone.

Four bands. All different, but all cut from the same cloth, all rooted in the 70’s and all brilliant – and sometimes you cannot say fairer than that, because this was as good as metal gets.