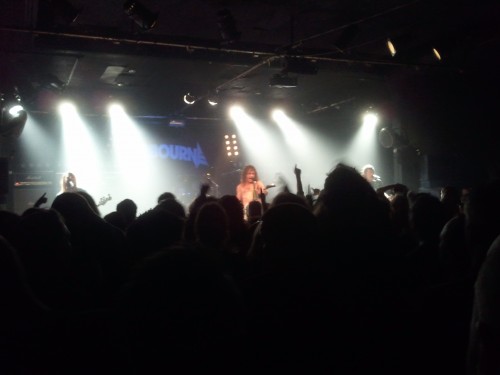 In the first of her guest columns, blogger Skylla39 talls us about what it was like to see Airbourne the other week. Check out Skylla’s blog cos its ace!

When Airbourne announced 3 small club dates in the UK before touring again in October supporting Black Stone Cherry, I was particularly thrilled that they had chosen my local venue as one of those dates and for them to play at The Wedgewood Rooms in Portsmouth, my favourite venue over the last 30 years was just something I had to see.

As this venue was probably the smallest capacity of the 3 dates it sold out pretty fast but I was able to track down a ticket for the event and I am so glad I didn’t miss this evening, it was destined to be something special.

The chosen support band for the evening were Skam, a 3 piece based in Leicester that have already released 2 albums so far.

Having played a number of gigs and festivals over the last few years, this band knew how to put on a great set to an already almost packed out venue.

As I had heard their most recent single on the radio I was very much looking forward to seeing them live and they didn’t disappoint. It was a powerful set of rock and featured a mixture of songs from both albums including Massacre, the title track from their latest album Peacemaker and the very popular Holy City, the guitar riffs and great vocals more than pleasing the crowd ready for an evening of great rock music.

I would certainly recommend seeing the band if they are at a venue near you and I definitely need to check out their albums having really liked what I heard from them.

The Airbourne T-shirt was a badge of honour in the crowd that had now completely packed out the venue and there was an air of anticipation and excitement as the first notes from the band played out.

Airbourne were full of energy from the start, the crowd were just as energetic and the place erupted as the band took to the stage. Airbourne were here to rock and the crowd were here to rock with them. With Joel, David, Ryan and Justin showing why they are the band to see live, they threw everything at a delighted crowd including the odd beer can, the band were ready to party and so were the audience.

Starting off with Ready To Rock, it was epic rock song after epic rock song including Too Much, Too Young, Too Fast, No One Fits Me Better, Girls In Black, Stand and Deliver, Black Dog Barking and Cheap Wine & Cheaper Women from all of their 3 albums so far.

The set was full of great vocals, great riffs and great banter from Joel and the whole place was just on a high from start to finish seeing Airbourne in such an intimate venue.

Joel further delighted the crowd when still managing to not miss a single note of his guitar playing, he climbed onto the shoulders of one of the crew and proceeded to make his way to the back of the venue through the audience to where the sound desk was, delighting the crowd even more and especially those like me that were nearer the back as suddenly we were able to witness a rock god now only a few feet away.

Apologies to the rest of the band playing at this point but all eyes were on Joel. Even more impressive that he managed to do the same feat to get back to the stage whilst still playing the guitar.

After a set of excellent songs the band went off but there was no way they were going to finish the night without everyone there demanding more and so they came back to a hyped crowd finishing off the set with Live It Up and Running Wild which very much echoed how brilliant and animated Airbourne had been for the whole evening.

Airbourne tonight proved how much they can rock, Portsmouth showed how much they love bands that rock and the Wedgewood Rooms was a great choice of venue to bring both of them together.

It will certainly go down in the history of gigs that were considered to be special as both Skam and Airbourne put on incredible performances. I can only hope Airbourne loved the crowd as much as the crowd loved Airbourne and that they come back again to Portsmouth the next time they decide to tour in the UK, as I want to do such an awesome evening as that all over again.