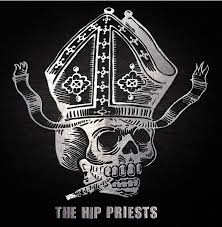 MVM’s Resident punk expert Donnie gets on his black denim for the new one from East Midlands sleaze lords, The Hip Priests

Four full-length albums in and the dedication to the seedier side of rock and roll shows no sign of abating for Nottingham Lords of Sleaze The Hip Priests.

Roman Emperor Caligula was well known for his love of excess;  be it wine, women or song. Were it not for the 2,000 year time gap then one could easily imagine The Hip Priests performing for him at one of his many “get togethers”. In fact they would probably have been his house band!!

The opening track “Vodkacoma Casanova” sees the band show their hand from the off whilst the rest of the album sees then pull cards from their collective cut-off sleeves.   The format stays un-ashamedly the same throughout and that’s to it’s credit.  If you want Variety go to the London Palladium!!

The barnstorming live favourite “Motherfucker Superior” follows hot on the heels of the opener and possesses the same energy and power that slithers through the other 12 tracks on offer.

The only break in the turbo-charged motif is in the opening verse of  un-charming duet of “Treat Me Like Dirt” which features the spiteful vocal talents of Chezza.  Elton John & Kiki Dee this ain’t!! Think Shane MacGowan and Kirsty McColl speeded up and attitude set on “Fuck You”!!

The pace is unrelenting and, at times, unforgiving.  You would be forgiven for taking a short break halfway through this album to give yourself chance to draw breath.  The aural equivalent of taking a brief time out from a circle pit!!  That said if you can make it through in one go then the gods of sleaze bow before you!!

Vocalist Nathan von Cruz is the disgraced purveyor of filth with a vocal delivery lacking suggestion and demanding attention.  Perfectly suited as the bands mouth/cod piece.  As you would expect the rhythm section (bassist Lee Love & drummer Skintight Jim) is as tight and you can get without suffocating something.  This allows Austin Rocket to let loose on a series of six-string shreds that forces  the momentum into overdrive. 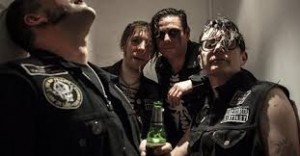 Tracks like “Jesus Died So We Could Ride”, “Evil Sweat” and “Saints of Excess” are instant classics.  So to is the anthemic “Instant Delinquent” a tale, much like the rest, of the depraved nature that exists in the world’s bloated underbelly.

The “up it’s own arse” rag NME gave it a review, of sorts, and promptly dismissed it.  I’m not quite sure what they were expecting when they heard it.  Introspective, floor gazing and emo-like outpourings of internal pain and not the currency in which THP deal in.  Unlike the NME you will know the drill. Lyrics for the most part extent are secondary to the overall theme.  Didn’t do AC/DC any harm did it?!!

In essence the band is like a punk rock whip with the five lashes made from The Stooges, Misfits, Rollins Band, Turbonegro and Motorhead, and this foursome are whipping crowds into submission, whilst they pitifully beg for more.

The message is simple. We are The Hip Priests and you are not. It’s not clever but it’s BIG.  Remember, there is sleaze then there is………….. The Hip Priests.

Thank you THP my life just got a whole lot dirtier.