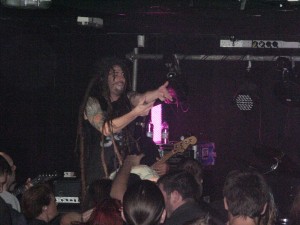 Shadows Fall play their penultimate ever show in the UK

Ok, The Hairy Dog. Sounds dodgy, right? But in fact it’s a decent, compact place on the outskirts of Derby city centre. Albeit the frankly enormous tour bus parked outside tells you that at least two of the bands on this packed bill are used to playing bigger venues than this across the pond.

First up of the astonishing six bands that appearing are Skies In Motion. Nearly 5000 likes on their Facebook page bodes well for these young upstarts. The crowd is sparse but relatively willing. The volcano inducing riffs are in place so to the breakdowns. Live favourite “These Are My Dreams” sees the band at their best, but it’s just too early for a circle pit, as their repeated pleas of “wake the fuck up Derby” might testify.

The blastbeats keep coming at ya as Kent hardcore crossover merchants Pay No Respect are evidently schooled in the New Wave Of American Heavy Metal that’s coming later in the evening. Early Lamb Of God-isms are to the fore throughout. New tune “Face Defiance” has the potential to become a real mosh inducer in time. Elsewhere there is just enough class to their metallic rumble, while “The Damage Is Done” adds some classic thrash riffs to the proceedings. Promising.

War Of Ages singer Leroy Hamp has a problem. It turns out that the Lasagne he ate just before coming onstage isn’t sitting well. Digestion issues aside Hamp and his bandmates are packed onto the tiny stage for an exhibition of metalcore and seem intent to make good on the promise to make a difference with their music. The Pennsylvania mob are openly Christian and their songs deal with those beliefs. WOA have just released a new album in “Supreme Chaos” and in common with the rest of their material the new songs do not deviate too far from the metalcore template, with both growls and clean vocals mixing with huge bass heavy breakdowns. New single “From Ashes” – with it’s huge chorus – is the pick of their set.

Massachusetts mob The Acacia Strain are a notch up in heaviness from that which has gone before. After being initially joined by Pay No Respect’s Joe Kenney, TAS vocalist Vincent Bennett is all present and correct by their second song. Amongst the crushing older tunes, there is a selection from forthcoming album “Coma Witch.” Bennett sees his band as “a channel for anger, because no one likes anyone that’s happy all the time.” If that’s his mission statement then Acacia Strain live up to it. When you have a song called “The Impaler” you expect brutality and that’s what you get. Not for everyone, and you know what? That’s the point.

Shadows Fall are bowing out from touring after this run of shows in the UK and Europe. If this really is goodbye (and onstage they explain that they will play here again but not regularly), they appear absolutely determined to go out on a high.The Shadows Fall career path has been an interesting one – one which has taken them from the almost death metal of their early output, to their most recent record “Fire From The Sky.” One thing has remained consistent – aside from singer Brian Fair’s superb dreadlocks – and that has been the quality of the songs. SF deliver a charged up set which, when you boil it down, is largely just excellent thrash metal. Fair, clad in his Celtics vest and giving away the fact that they are Boston to their (metal) core, is a fine frontman and seems determined to finish while at the top, and not even a fairly sketchy sound can derail him too much. “Eternity Is Within” is almost as massive as the enormous vehicle that brought them here and features some stunning soloing from Felipe Roa, gives some clues as to why they can bother the top 40 back home. Towards the end of their set they throw in “Thoughts Without Words,” which hadn’t been played on a recent US tour but is welcome here, as is the cover of Bob Marley’s “War” which they chose to use as a goodbye. A fitting epitaph, although they surely will be back after the hiatus.

So it is that at 11pm the final band on this mammoth evening takes the stage. Most of the crowd has stayed on for Unearth despite the late hour, and anyone that is flagging is woken immediately by their urgency. The band has been relatively inactive in recent years. Their last record came out some three years ago (although some new material is due in November this year) and although like most of those that have been on so far tonight they are rooted in US metal, with Unearth there are perhaps more Brit touches. Second track “My Will Be Done” for example features some Iron Maiden type riffing. There is a smattering of new material aired and “Burial Lines” is crushingly effective. Old favourite “Watch It Burn” follows and it too gives Derby a bloody nose, while War Of Ages singer Leroy joins them for a spell, before normal service is resumed. In common with many bands of this type, Unearth’s early output was monstrously heavy and when they dip into their back catalogue tonight, they do so with a real purpose, and as the apocalyptic “Black Hearts Now Reign” brings the set to a close this Hairy Dog is shaking rather than wagging it’s tail.

At times tonight it feels like a festival. As it was the way for Shadows Fall to call it quits, Pay No Respect to announce themselves to a wider audience and for Unearth to return to their bludgeoning best, it was more than just another gig. This was The Hell on Earth tour 2014 and amen to that.