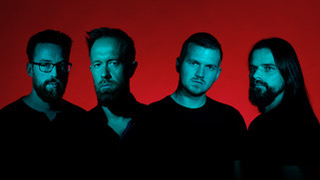 ‘Hit and Run’ is the new rock epic taken from Empyre’s upcoming album ‘Relentless’. Standing out as one of the most emotional and powerful tracks on the record, it’s accompanied by a cinematic new video.

WATCH THE VIDEO FOR ‘HIT & RUN’

Commenting on the track the lead singer Henrik adds, “Hit and Run is about returning to somewhere you once knew well, picturing it as if it had been frozen in time, but on your return the realisation comes that whilst the place still provokes powerful memories so much has changed over the years that there isn’t much to relate to there anymore. Specifically it’s about me returning to a town where I lived in Denmark. It’s quite a sad song, but we felt the sentiment behind it really lent itself to a warm, slightly dreamy, 80s vibe, and that may well be something we want to build on in the future.”

The video, filmed at a secret location near their hometown of Northampton, was captured at sunset on a balmy evening late last summer. Due to the hazardous nature of accessing the location they DIY’d the video, taking the smallest crew possible and minimal equipment. The band comment “We couldn’t park that close to the place, so it really was just us and our cameraman Derek dragging a drum kit, a few instruments and a crate of beer, across piles of earth, fly-tipping and razor-wire to get into the place, trying not to rip our clothes, injure ourselves or smash our kit before filming”. The footage was then edited by Henrik, and the video was complete.

Empyre are quickly growing in stature on the UK live scene, their first two events of 2023 are SOLD OUT including a headline show in their hometown of Northampton. With more headline shows to be announced for the first half of this year they are looking to make a big impact before reaching the summer festivals.

Tickets are available from: https://www.empyre.co.uk/

Relentless will be released on 31st March via Kscope on the following formats, with additional bundles and items available exclusively through the Eyesore Merch band store – all are available to pre-order here – https://empyre.lnk.to/Relentless

All pre-orders via the Eyesore Merch band store will receive a hand-signed photo and an exclusive free download of Empyre’s unreleased cover of the David Guetta & Sia track Titanium.