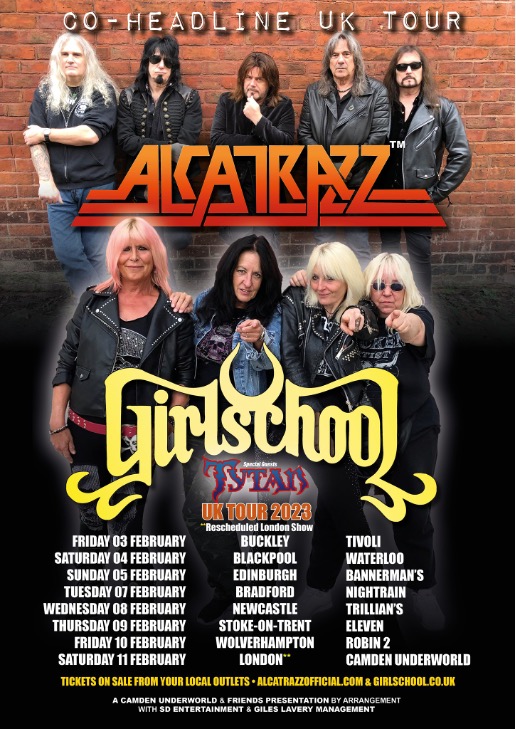 On the 40th anniversary of their formation, the mighty Los Angeles-born guitar-driven heavy metal icons ALCATRAZZ are set to team up once again with British longest running all-female rock band Girlschool for a co-headline UK tour in February 2023. Both bands successfully completed an incendiary full European co-headline tour in 2022 and will bring their electrifying and foot-stomping performances to eight cities across the UK.

Jimmy Waldo (ALCATRAZZ) comments: “The band just keeps getting better every show! Across Europe last year we had a fantastic response and enthusiastic fans nightly! Us touring with Girlschool really brings the METAL to town and we are looking forward to bringing it to the UK… THE home of Heavy Metal! Black Sabbath, Saxon, Judas Priest, Iron Maiden, are we excited?… Are you kidding me?!”


Denise Dufort (Girlschool) adds: “We are looking forward to once again performing for all of you and sharing the stage with our friends Alcatrazz, we had such a great time across Europe last year, we can’t wait for these UK dates!”

With neo-classical “shred lord” Joe Stump on guitar, founding members Jimmy Waldo and Gary Shea, plus the addition of Doogie White, ALCATRAZZ are offering a high energy metal show covering the ALCATRAZZ classics plus Doogie‘s own work as a member of the Michael Schenker Fest and Ritchie Blackmore‘s Rainbow. Newly joined by drummer Larry Paterson, formerly of Blaze Bayley Band, Alcatrazz are a metal supergroup in the true sense of the word.
Marking forty-five years filled with sheer passion, stamina and talent, Girlschool will ensure bold, heavy and fast shows loaded with classic gems and fan favourites.

Kicking off in Buckley and ending in the iconic London venue Underworld, this tour is a must for all metalheads.

Following this incredible run of dates, both bands will be gearing up to release brand new records in the summer 2023. More info to be announced.

About ALCATRAZZ:
Formed in 1983, Alcatrazz became famous for its blend of melodic and progressive rock and for introducing guitar heroes Yngwie Malmsteen and Steve Vai. Emerging in 1983 with No Parole from Rock ‘n’ Roll, which featured the hit ‘Island in the Sun‘, the band continued building popularity in 1985 with their sophomore effort, Disturbing the Peace, which contained the hit, ‘God Blessed Video‘. The band issued one more studio LP, 1986’s Dangerous Games, before ceasing operations the following year.  The band regrouped and released highly acclaimed Born Innocent in 2020 (their first studio album containing all-new material since 1986) and their fifth offering V in 2021.

About Girlschool:
Originally formed in 1978, Girlschool enjoyed strong media exposure and commercial success in the UK in the early 1980s with their albums of “punk-tinged metal”. During their career, Girlschool travelled the world, playing at many rock and metal festivals and co-headlining with important hard rock and heavy metal bands, such as Black Sabbath, Rush, Rainbow and Motörhead. They maintain a worldwide following and are an inspiration for many female rock musicians. The band features original and founding members Kim McAuliffe and Denise Dufort and long-tenured members Tracey Lamb and Jackie Chambers.