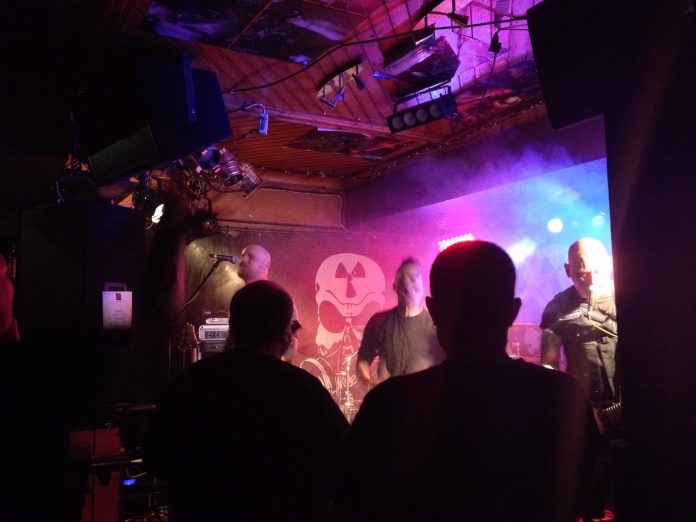 Unlike a couple of the other bands on this packed bill, East Midlands boys Enemo J aren’t strictly a thrash metal band, preferring to come at things from a crushing kind of Deftones-in-a-temper sort of way, but you could stick them on with anyone and they wouldn’t be out of place. Simply put Enemo J always bring it when they play live. Tonight is no different. Singer Craig ends flat on his back, having just seconds before, jumping around with his dreadlocks flying. A new album out soon should see them transfer this incredible energy into their studio work.

The fact it took Kremated 10 months to find a drummer deprived us of seeing them in full effect for too long. Now with Jack happily ensconced behind the kit, the London bruisers can get back to what they do best. Like sandpaper to the balls this brand of thrash is extreme and extremely nasty, and the likes of “Total Warfare” and “Three Minute Warning” are fast, brutal and brilliant. The way thrash should be, but with the added stench of a dirty bedsit about them. The cover of “Metal Anarchy” seems to fit and brings with it just the right amount of punk snarl. They end with – what else? – “Thrash Ain’t Dead” and in between singer Pete Dee reckons they’ve got “a big announcement on Tuesday, but he’s not allowed to tell us yet, the big tease. Whatever it is, Kremated deserve it.

Speaking of bands it’s been too long since we’ve seen them….. The sight of Eradikator on a stage again is one to savour, because, as we’ve bored everyone saying for what seems like years and years, Eradikator are superb. The local four piece have been recording a new album, and they take the opportunity to play some of those songs tonight, with the menacing “Fortress Unknown” and the groovy slam of “Man Behind The Mask” boding exceptionally well for what’s to come. Not to say they forget that stunning debut record, however and “Hell’s Sentinels” is, as always, a work to behold. For too long Eradikator have had the words “Birmingham’s own” attached to them. Now is surely their time to break through.

“Nay bullshit, just songs tonight” says Def Con One singer Davey about halfway through their set. He’s not kidding. For most bands there is preamble, fuss even. Not Def Con One. Barely had the drums been assembled it seemed, when with a simple “Hello” the Geordies were off. As if they’ve committed a robbery and are fleeing the scene, DCO are one of those bands that believe in a blitzkrieg attack. They’ve got groove, they slam, and they’ve got former Venom man Anton on drums – how can they go wrong? The answer is they don’t. At all.

What Def Con One do is something like Pantera would have done if they’d been a thrash band. That is to say for every machine gun riff there’s a huge breakdown to balance it out. And my, they are relentless! “Scarred For Life” from the album they put out last year, is packed full of bass driven good stuff and the affable Davey has the perfect gargling-with-razorblades delivery to go with it. “Steeped In Pain” from their debut is a steel toe cap to the teeth and “No More Hate” in actual fact appears that it’s seething with rage.

“Warface” rather appropriately appears ready to invade anywhere. And at a moments notice while its at it, plus there’s even time for a cover and “Anarchy In The UK” hasn’t sounded this threatening in years.

Tonight Def Con One played a song called “Brute Force And Ignorance,” a stunning thing, it – perhaps unwittingly – summed the night up. Unremittingly and uncompromisingly heavy, it is heavy metal writ large. Boil everything down, divide anything into sub genres for as long as you want, but it only comes down to one thing: visceral excitement. Tonight delivered that by the bucketful.