Inspired by Slayer and Hate Eternal, now its Cambion making the evil noise

Inspired by the molten records of ancient Slayer and early millennium evil Death Metal – Krisiun, Angelcorpse, Hate Eternal, Ophiolatry, and others – Cambion was formed in late 2013 by T.R. and R.O. to bring back the tradition of speed obsessed blasphemous Death. Joined by CJH (bass) and SD (drums), Cambion released the 5 song demo, Unfold Chaos Supreme, and are poised to tear a rift in space-time.

The tradition of fast, blasphemous Death Metal has been successfully revived with this feral, five song demo containing an ultimate, malevolent onslaught of speed driven blasphemous Death Metal. CAMBION are of the few ones who can convincingly and skillfully adopt the spirit of bands like Abhorrence, Krisiun, Slayer, Hate Eternal, Ophiolatry and create an own image of ravaging savagery. Nothing more needs to be added. Hear this pure, adrenaline, ecstatic rush of decimating intensity and burn! 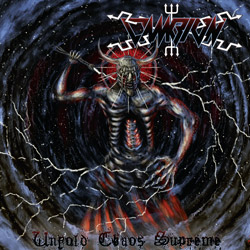