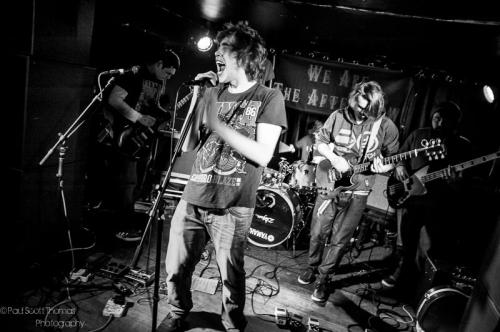 When South Wales’ Dead Shed Jokers entered Sonic One studio’s in Llanelli in the middle of August 2014 they had a point to prove, not least to themselves…

With the debut album, ‘Peyote Smile’ being roundly lauded by bloggers from as far away as Canada and Colombia, and their inclusion in Classic Rock magazine’s list of “Hottest New Bands in Britain” in March 2013, the band were rocked at the turn of the year when two of their gang announced their intention to leave the fold. It meant a stuttering and uncertain beginning to 2014. However, knowing it would be the last thing the five ever did, they eventually re-grouped to create a sonic testament to their 7 year musical friendship. Under the wing of fledgling label Pity My Brain Records, the resultant sophomore album was recorded in four days, and marks a fitting end to act one and a triumphant new beginning for the Welsh band who people have found so hard to categorise.

Lead single ‘Memoirs of Mr Bryant’ already featured on Classic Rock magazine’s cover mount CD, describing the song as “a face full of scuzzy, groovy intensity”. They handed it the bold moniker “the Sound of 2015”. Other reviews would mention the quality of the song writing craft, the intensity of the playing and the powerful vocals. In attempts at reference points they would liken the band’s sound to artists as diverse as QOTSA, Frank Zappa, Tool and Jimmy Hendrix….but would also marvel at theirs their originality and scant regard for trends or genres.

Dead Shed Jokers tell us they have done all they wanted to with the record, explaining to MVM: “We have managed to create an incredibly inventive, diverse, and all round monster sounding album, that harks not only to a time when rock music was born of imagination, but also to a bright future where hopefully uniqueness, creativity and individuality will again be celebrated by all.”

The Dead Shed Jokers album is out via Pity My Brain on 13th April.

The band are on tour in March and April.