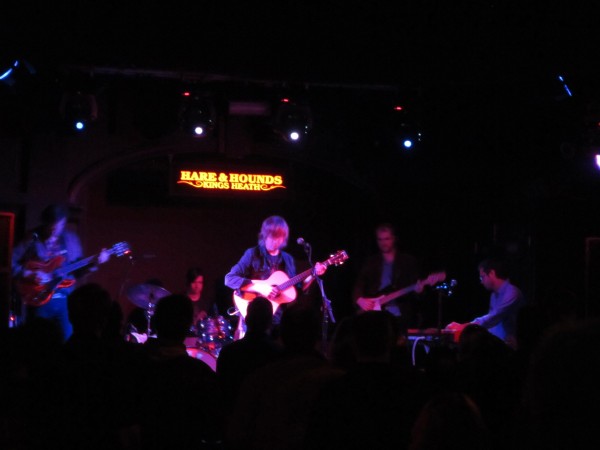 Damian watches on as Virginians vanquish Brum on their virgin visit

What the difference between a folk singer and rand a pizza?  a pizza can feed a family of four. Welcome to the world of being on the road with Paul McClure.The jovial East Midlander starts with “Long gone” a track served up with an acoustic guitar and harmonica accompaniment, amongst his early songs are, “Song Six” and“Unremarkable me” the latter of which is dedicated to his wife. “Pollyanna”, “I could be a happy man” and then “Moments lost” closes a short but very enjoyable set. Paul shares that he does a lot of House shows, where he will come over and entertain you and your friends at home in a relaxed setting. On this showing tonight it would be a good investment to hire the Rutland Troubadour for an amusing evening.

Sons of Bill have a problem, happily though, its only with accents. Midway through their set, someone calls out from the audience to be met with blank looks as SoB cannot understand what’s being said. One of their number jokes that he’s getting concerned as they’ve not ventured North yet… such is the way for a band touring the UK for the first time.

Linguistic issues aside Sons Of Bill is a five-piece rock and Americana band from Charlottesville, Virginia founded by brothers Sam, Abe (the one fretting about his further adventures….), and James Wilson, along with bassist Seth Green and drummer Todd Wellons. The band took their name from the Wilson brothers’ father, Bill (naturally!)

They kick off the set with “Big Unknown” followed by the ethereal feeling “Bad Dancer” from their latest release “Love and Logic.” “Fighting through the pain”, “Road to Canaan”, “Siren Song” and a song about their native Virginia called “Joey’s Arm” quickly follow.

Although the band have their routes in Americana and alt; country, that doesnt begin to give the full flavour of their sound. Notably on “Find My Way Back Home,” they take themselves down  a similar path to Radiohead’s “Paranoid Android.”

“Virginia calling” closes the set tonight before the guys head off stage.

The boys return and launch into an excellent version of the Replacement’s “Here comes a regular”, dedicating it to James from Cosmic American who are promoting the evening, and who believed in the band and has taken them over to tour the UK. “Turn it up” and “Hymn song” close out an excellent show in front of a reasonable sized crowd in this venue.

This was a wonderfully tight set, played by excellent musicians. They are up there with other Americana acts such as Witco, Uncle Tupelo, Chuck Prophet, Richmond Fontaine and the Willard Grant Experience.

Destined, for bigger things? You Betcha. Bill will be proud.