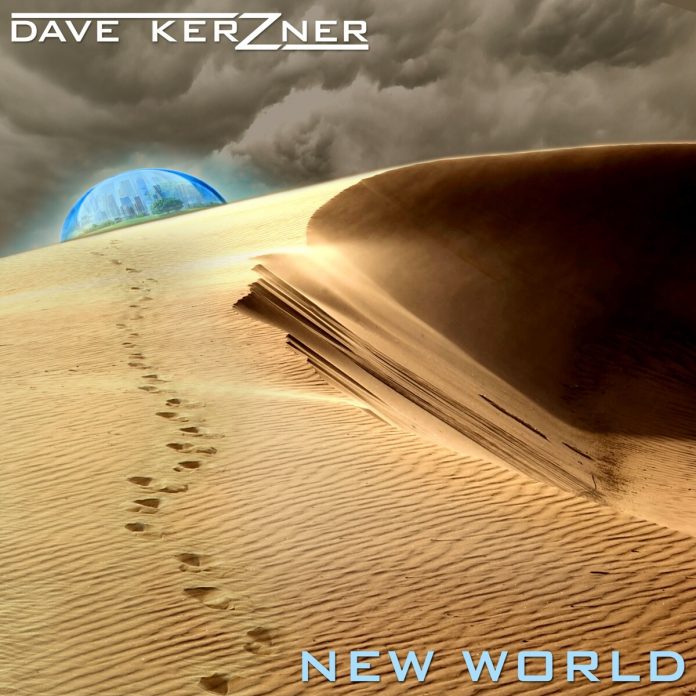 A look at the special guest list on “New World” gives away the fact that this is not your average debut solo record. Contained in this rather fantastic 70 odd minutes are a cast list that includes Steve Hackett, Francis Dunnery, Keith Emerson, Nick D’Virgilio, Simon Phillips, Billy Sherwood, David Longdon, Heather Findlay, Durga McBroom, Colin Edwin and others, and even the most cursory of checks on the internet tells you that Kerzner – Squids to his mates apparently – has already had a career that most would kill for.

One of the worlds foremost samplers, more recently Kerzner was the keyboard player in the brilliant Sound Of Contact (co-writing the incredible “Dimensionaut” album with Simon Collins). He spilt from that band last year and immediately set about raising money on Kickstarter to make his first solo album – after roping in some of his famous mates, of course.

The result is “New World” –  and it is incredibly good.

Kicking off with parts 1-5 of the “Stranded” suite, the other five parts bookend this record, this is very quickly, and very obviously an album that has been thought out to the last note. “Stranded” is a gorgeous, lush, undulating piece of music that has as it’s centrepiece a wonderful guitar solo from Hackett in part three.

“New World” is an album that has a nostalgic feel, without ever wallowing in the past. “Into The Sun” is a prime example of this. Classic, timeless prog perhaps but it could only have been made in this century, not the last.

The playing here is magnificent, as you’d expect, “The Lie” builds on multi-layers and features something approaching a catchy chorus –  the identity of “boy who chose to lie” is never revealed, but it’s a brilliant song either way.

A ticketing clock adds urgency to “Under Control” while “Crossing Of Fates” (which features Keith Emerson) is a keyboard led freak out of a thing. The acoustics of the trippy “My Old Friend” provide a stark contrast to what has gone before and the enormous “Ocean Of Stars”and it’s companion piece “Solitude” are best taken as a whole to become something to lose yourself in.

“Nothing” which deliberately takes the tempo up has echoes of “Abacab” era Genesis, and the Beatles-esque title track is dreamy brilliance.

“New World” ends as it began, with the remaining 17 minutes of “Stranded” and it’s a fitting and glorious conclusion.

This is all but flawless, and in a year that has already given us some brilliant Prog rock records, “New World” might be the best so far. Great job, Squids. Now, don’t make us wait so long for the next one…..