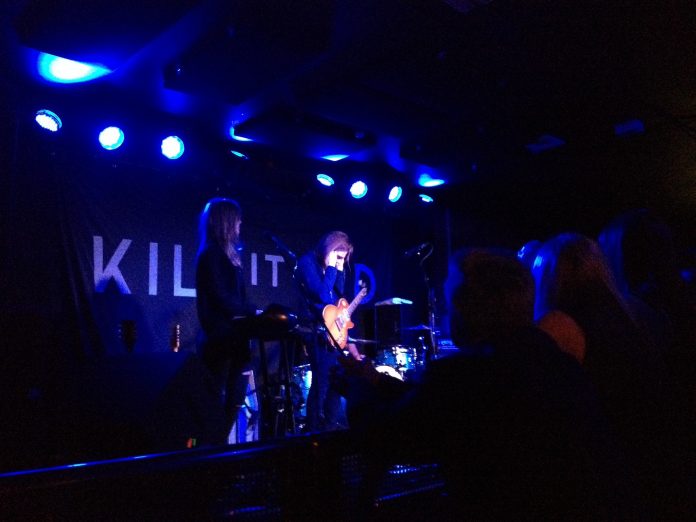 UK crossover hopes stop off in the Black Country

“An English gent with a penchant for fuzz,” so reads the bio on John J Presley’s Facebook page. It is a pretty accurate description as he and his band – “Lady” Perry on Organ and and Tom Glendenning on drums – rattle through some songs that amount to opaque blues with a blurry edge. Part songs, part the soundtrack to some unmentioned film noir, there is a pleasing darkness in Presley’s set. “Left” crackles and pulses with an urgency as does most of what he does. A man of few words, nonetheless Presley does manage to captivate. There are elements of Nick Cave and Tom Waits, which mean there is much to like here.

From their beginnings as a university project, Bath four piece, Kill It Kid can now go off on UK headline tours and warrant two page features in the current edition of Classic Rock Magazine. Along the way they’ve been lauded by just about every critic there is and legendary music figure Seymour Stein, no less, says they are the real deal.

They’ve done this by being rather good, and making music that’s rather hard to quantify. Often lumped, for convenience rather than any fact, into the new folk revival, their stuff actually takes in blues, rock, gospel and americana as it winds its way across genres as if taking a merry stroll through convention and all the while giving what other bands are doing scant regard.

Their superb latest album “You Owe Nothing” does all of those things and more, and it’s with a track from that they begin this evening, as “High Class” lives up to its name.

KIK are, it must be said, pretty formidable when they lock into a groove, “Pray On Me” features not only some prime heavy blues but also some fine vocal jousting between Chris Turpin and Stephanie Ward which underpins many of the songs here.

The single “Caroline” soars in on a huge chorus and you perhaps aren’t prepared by their studio work for how magnificently raw the band are live. Heavier than you might think, but also capable of a really tender delivery, this is absolutely evidently a band of real talent. Which means that a stone cold stomper of a song can be – and often is – followed up with the likes of “It Hurts To Be Loved By You,” which drips with emotion.

Even when they do a cover they Springsteen’s “State Trooper” into one of their own, transforming the claustrophobic acoustics of the “Nebraska” album into a widescreen wall of sound.

There is also a track, “Boom Shally Wah,” that so far hasn’t appeared on one of their albums. It needs to as its a belter of a song. The set ends with “I’ll Be The First” which swirls along, reaching its crescendo very neatly. When they return for their inevitable encore, its a duet between Ward and Turpin that really catches the eye as  “Law Of Love” is laid bare in the most fragile way.

They might draw comparisons to bands like The White Stripes, but there is a lot more in the flourishes here – particularly with Ward’s excellent keyboards – to set Kill It Kid apart from the pack. Modern, but so very obviously and very deliberately rooted in the past – Turpin speaks of his love for early blues and country on stage tonight –  Kill It Kid’s time is surely now.