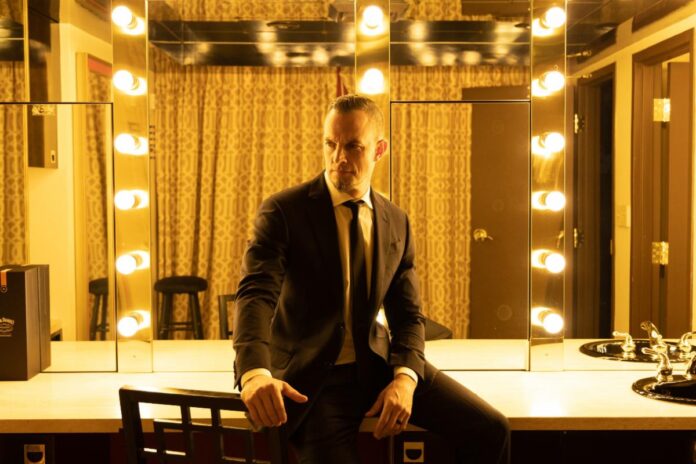 Following the announcement last month that he is releasing a collection of Frank Sinatra covers to support NDSS (National Down Syndrome Society), GRAMMY® Award Winning musician, producer, author and founding member of the hard rock bands Alter Bridge, Creed, and Tremonti, Mark Tremonti is releasing another music video from his Tremonti Sings Sinatra album. The video for “Fly Me To The Moon” – shot in iconic black & white – documents Mark in the studio performing the timeless Sinatra classic with members of Frank’s original band. The video for “Fly Me To The Moon” can be seen here: https://youtu.be/heGRvVBaB68.

Tremonti Sings Sinatra – Mark’s most-ambitious and challenging project to date – is set for release on May 27th. Mark has partnered with National Down Syndrome Society (NDSS) through his new charity initiative called Take A Chance For Charity and proceeds from the album will go to support NDSS and the work they do to advocate for and support individuals with Down syndrome and their families. Mark and his family were blessed to welcome their first daughter Stella in March 2021 – who was born with Down syndrome – and the idea for the project was born. A video sharing the story of Take A Chance For Charity can be seen here: https://youtu.be/7FroQm-63RI. Mark Tremonti has come together with surviving members of Frank Sinatra’s orchestra, creating new takes on some of the classics and some deeper cuts from Frank’s catalogue. From the opening horns and piano of “I’ve Got You Under My Skin” to final vocal outro of “All Or Nothing At All,” Mark Tremonti showcases the signature vocal approach and exemplary musicianship that made Sinatra’s work timeless. To see his vision through, Mark reached out to Frank Sinatra’s musical director Mike Smith who collected as many remaining members as possible of Frank’s touring band to record the music for Tremonti Sings Sinatra. Where sadly, some members have passed away, the orchestra was completed by a cast of stellar musicians, between them known for playing with Aretha Franklin, Stevie Wonder, Ray Charles, Lady Gaga, Count Basie, Buddy Rich, Barbra Streisand, Dizzy Gillespie, and more. The album was recorded at Chicago’s Palisade Studios and Crystall Recorders, with arrangements from Mike Smith and Carey Deadman.
Popular standards like “I’ve Got The World On A String,” “My Way” and “That’s Life” find new life in the hands of these incredible musicians. Mark Tremonti – known for his guitar work that has won him countless accolades – leaves the instrument behind and just sings on the 14-track album. The artwork on the album cover is an original painting that Tremonti created especially for this project. A video for “I’ve Got You Under My Skin” can be seen here: https://youtu.be/vSqQ7Bdpxn0. A recently announced live performance of Tremonti Sings Sinatra with members of Frank’s orchestra on May 14th in Orlando, Florida at The Abbey promptly sold out.
Tremonti Sings Sinatra is now available for pre-order at: https://linktr.ee/marktremonti.

Previous article
NEVER BETTER
Next article
CAL IN THE ALIENS