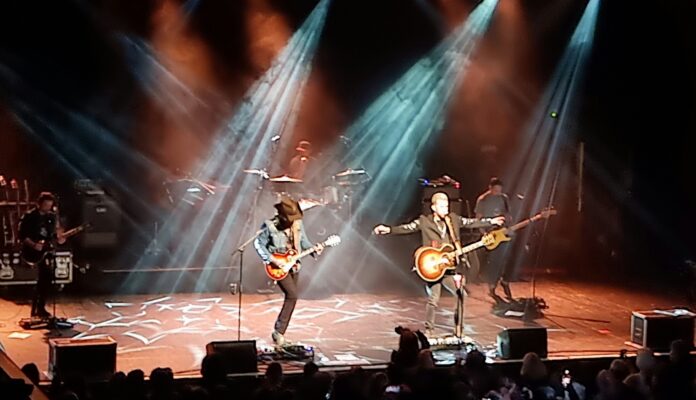 On my notes for Stephen Wilson Jr, it said just this: Blues for the Apocalypse. If you watched him play this half an hour and thought any other way, then good luck to you. But the Indiana native (he now lives in Nashville where he works as a writer for BMG Acts) doesn’t sound like anyone else. A voice like Steve Earle, with the look of a Truck Driver with a meth habit, he delivers his songs in an unsettling way. Before “Cuckoo” he tells a story about being mistaken for a young Steven Tyler, before “Year Of The Young 1994” he tells a story about being dumped two hours after his first kiss, and all the while his buddy Scotty rips the living crap out of his slide guitar in a way I’ve never heard before. Just when you think things can’t get stranger he covers “Something In The Way” by Nirvana – and along the way there’s a medical emergency too – but the man who reckons he got his father’s name because Wilson Snr was “so high when they asked him my name he thought they were asking his, probably,” has a real talent, and his outsider status makes him compelling too. He ends with nee single “Holler From The Holler” which came out on Friday and seems like most of them to have deep meaning, This is his first “proper tour” he says. It won’t be his last. Odd and slightly disconcerting he might be, but you can’t stop watching.

By a quirk of date, it is – give or take one day – four years since MV watched Brothers Osborne next door at the Academy 2. I wrote at the end of the review of the show: “The pair and their three bandmates – have it all. They are primed and ready to do what their former touring partners The Cadillac Three have done, and perhaps eclipse them.”

Fast forward 1460 days precisely and TJ Osborne is stood on the stage in front of a sold out 3000 crowd and says: “a lot has changed in the last couple of years, Birmingham…..” he’s not wrong, of course. What he doesn’t need to say, mind you, is that along the way he, his brother John and their stellar band now numbering four, have moved up another level.

They are on stage for around 80 minutes and what you are watching is an arena rock n roll show to all intents and purposes. They are quite simply stunning.

A lot of the set comes from the “Skeletons” record. The title track, “Headstone” (a track on the recently expanded version) and “Shoot Me Straight” from their breakthrough “Port Saint Joe” album are all beefed up. Two things strike you when the band play live. Just how heavy they are and just how good a guitarist John Osborne is. He knocks solo’s out like he wants to be Slash.

“21 Summer” changes the vibe slightly, but there’s little doubt that “Younger Me” – their most recent song – is the cornerstone of the set. It addresses directly the fact that TJ last year became the first mainstream country star to come out as gay. It’s dealt with sensitively and the crowd reaction visibly moves the singer.

A couple of acoustic tunes with just the brothers (“what do we want the others for?” asks John, sees “Weed, Whiskey And Willie” emerge as a gem and with a smile and a “we wrote a setlist for this and realised we hated it!” the band return for “I Don’t Remember You (Before Me)”.

“Rum” turns this into an overtly pop party, “Dead Man’s Curve” dials up the southern rock, and the cover of “Honky Tonk Woman” gives it even more of a country twang. However, “It Ain’t My Fault” is all that the band are about. Beckoning everyone to stand (“we aren’t in church, let’s go Birmingham, off your pews!”) and the fact that TJ has the crowd on a string is never better shown, the track is fun, supremely well done and the thing explodes, as surely the band will do too.

They are rock stars so they encore. “All Night” is full of false endings and showmanship – and the fact there’s a snippet of AC/DC’s “Thunderstruck” shows, perhaps, where their heads are at.

It is inescapable that the next time you see Brothers Osborne in the UK they’ll be in arenas. It is equally true to say that they’ll shine there, they belong there and in their minds, they are their already. When you see a band just before they get massive, it’s obvious. It was here.