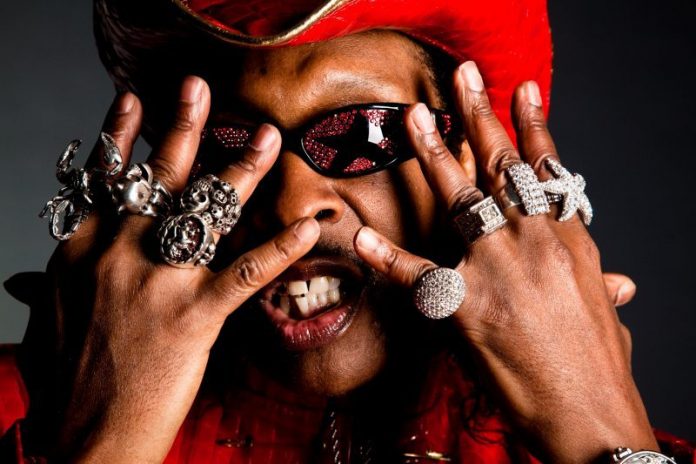 The track is taken from his upcoming album ‘World Wide Funk’, which will be released on 27 October via Mascot Records/Mascot Label Group and features an array of phenomenal talent including; Chuck D, Buckethead, Eric Gales, Doug E. Fresh, Big Daddy Kane, Musiq Soulchild, Bernie Worrell, Kali Uchis and many more.

The funk runs deep and rich on World Wide Funk, Bootsy Collins’ first studio album since 2011’s Tha Funk Capital of the World. Populated with musical friends old and new, and recorded in his Cincinnati home’s Bootzilla Re-hab studio, World Wide Funk marks both a reckoning and significant reboot for the Rhinestone Rock Star. Blue-chip rappers like Chuck D, Doug E. Fresh, Big Daddy Kane, DJ Quik andDru Down, along with guitar shredder Buckethead, join a curated posse of fresh new artists on a record that embraces everything from the classic P-Funk sound that Bootsy pioneered.

Bootsy explains: “I wanted to create a mystical monster that was born between a ‘Pee-hole & a A**hole,’ which automatically smelled fishy and funked up!’ At the same time, it could fit into a radio station format with a little wiggle room. But then ‘Boot-Rapp-A-Fella’ showed up and said that it would be ludicrous to do this. The ‘One’ kindly gave me the Funk Finger and showed me this World Wide Funkateer Drive going on out here, and he said ‘all you have to do is un-dress it.’ So I waved my hands in the air and gave up the funk like I just didn’t care. Then out of the clear blue, my man Brother-Nature showed up to announce that This is the Year of the Funkateer! The Funkateers began chanting, ‘Come back Bootsy, Come back, Come back, Bootsy Come Back.’ Not only do I have bootz on the ground, we got troops getting down, drones in the air and these young disciples were hungry and not a one of them was scared. The vets of Hip-hop, a la cream of the crop, shouted out to retain their gold, made me feel real good once again to know that they still got soul.” Or as his longtime partner in funk George Clinton once put it: ‘Free your mind and your ass will follow!’

Funk wasn’t always all about the bass, but Bootsy helped make it so.  He’s noted for rocking his custom-made star-shaped Space Bass like a lead guitar, both in the funk zone and alongside experimental producers like Bill Laswell. There’s no lack of fiery instrumental magic on World Wide Funk either, not with shredding virtuosos like Eric Gales, the mysterious Buckethead and Joe Mass onboard. “You can also hear Jabo and the late Clyde Stubblefield on the album as vocal guests,” Bootsy explains, “and former Prince drummer John Blackwell, along with Dennis Chambers, who left road kill up and down our mile long driveway.”

World Wide Funk also entails a call to activism – literally “Bootz on the ground, baby!” as the title track puts it. “The whole concept,” Collins explains, “was not only about playing music or being current on this album, but about teaching people how to funk for themselves so they can bring some funk to get some. We bring them hope like dope, so not one Funkateer chokes. Unity in the community is a part of this plan and when the Mothership lands there’s nothing but helping hands. WWF-Drive is about propelling ourselves and generations to come into the future with the speed of light as in Flashlight.”

A longtime activist himself, Collins has long given back to his community through the Bootsy Collins Foundation (bootsycollinsfoundation.org). The 501(c)(3) nonprofit is overseen by Patti Collins, Bootsy’swife, and it focuses on raising the self-esteem of bullied girls, preventive dental care for underserved communities, and providing musical instruments to disadvantaged kids.

Bootsy’s music and life are all about creating unity in the community, “but not necessarily the same old community.” He has never stopped generating new energy among new musical associates, and World Wide Funk is the latest example of his Promethean powers. It blends classic Bootsy, Analog (“aka the veteran artist”), and Slingshots (“aka the youngins”) into the silly serious world of Bootsy, with results that will extend far beyond the confines of our galaxy.

“I’ve never really been concerned about what others thought about me or my music, as long as it made you feel good & sexy, like them old house parties, sharing a coke and a smile while doing a bump and grind,” Bootsy concludes. “I’ve had the privilege to travel back in time to imagine; what it was like, ‘When a Stage Coach was First Class!’ Bottom line is, ‘MAKE MY P-WHOLE AGAIN!'”

Previous article
REVIEW: LORDS OF ALTAMONT – THE WILD SOUNDS OF…..
Next article
Life In The Fast Dane