REVIEW: LORDS OF ALTAMONT – THE WILD SOUNDS OF….. 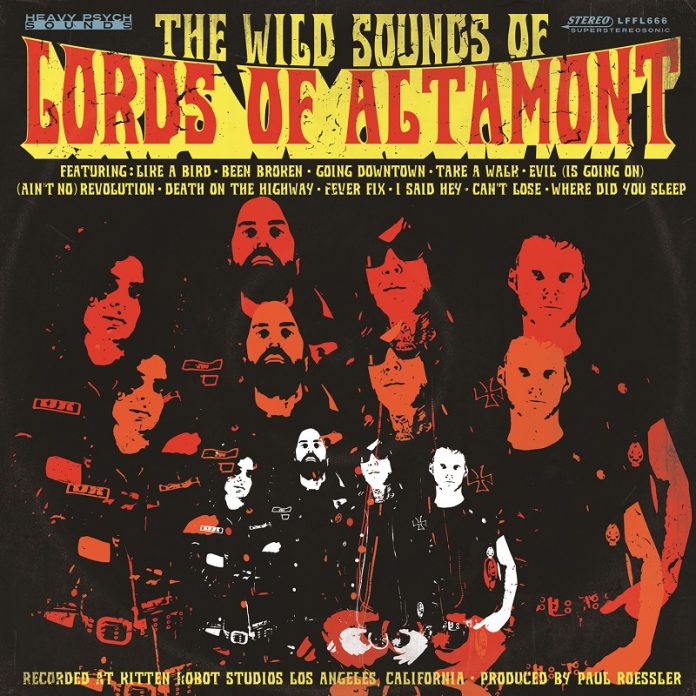 The opening line on “(It Ain’t) Revolution” – the first track on side b of this, the sixth LP (and you just know it has been made with vinyl in mind) from California’s  Lords Of Altamont – is more than just effective sloganeering. Rather it is a window into their soul.

One of those records that you barely need anyone to review. Look at the cover above and it tells all. These are leather clad members of some biker gang that have been born to be wild since they could stand up long enough to raise the middle finger to the man. What’s more, it is superb.

Any record that has the balls to not only start with a guitar solo, but also to add some organ before the intro is out doesn’t need MV to affirm its coolness, but “Like A Bird” is akin to a journey through rock n roll history from The Stooges, through Deep Purple and with a dose of The Hellacopters to boot. Add to that there is a palpable whiff of violence and you’ve got yourself a heady brew.

Better still is “Been Broken” a boot to the bollocks that is so tumultuous you almost beg them to do it again. Yes, its simple, but my it’s fun.

“The Wild Sounds Of……” works because it totally and utterly buys into the premise. If The Lords Of Altamont weren’t in this band, they’d be in other bands that sound like this. This is no doubt the music they love and were born to make.

Throughout the line-up changes of the last 17 years – and there have been many – LOA main man Jake ‘The Preacher’ Cavaliere has piloted the boys to make super-charged rock n roll as if it’s the most natural thing in the world. It’s just here he has rather excelled himself.

“Going Downtown” brings with it a chug and a sexual edge, “Take A Walk” on the other hand is the first of a couple that offers the bluesy barroom feel – but only if that bar was run by the boys from Sons Of Anarchy and “Evil” enjoys the thing so much it does it again. Only this time takes you out the back to administer a kicking.

“Death On The Highway” positively revels in its turbocharged, turned up to 11 intentions, “Fever Fix” is driven along on the back of machine gun drumming from Steven Van Der Werff before turning itself into something that approaches the majesty of The Sonics, while “I Said Hey” is a maelstrom of the type that if your new neighbours came round to say hello in such a way you might be best to move.

As you would expect, there is no let up here, either in speed or quality. “Can’t Lose” suggests “I can’t be stopped” and you are forced to agree. It comes at you like a tidal wave and when it comes to The Lords Of Altamont resistance is futile.

Indeed as it ends with “Where Did You Sleep” – which comes on like Judas Priest’s “Breakin’ The Law” would if it were a blues song, there is only one conclusion: Lords Of Altamont are the coolest gang in town. And you might as well join them.