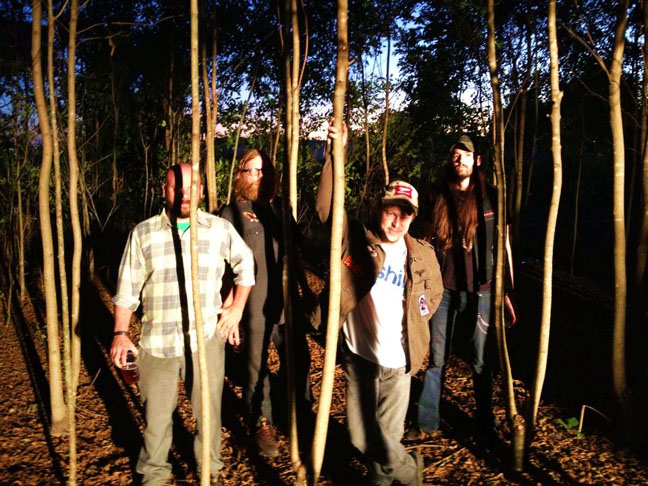 And look who’s quoted on the info……
Last week we reviewed the brilliant new Bohannons record. It’s out today. It’s great and you can check it out too,
CLICK HERE TO LISTEN TO THE FULL ALBUM STREAM VIA THE BIG TAKEOVER

HERE’S WHAT PEOPLE HAVE ALREADY BEEN SAYING ABOUT BOHANNONS’ BLACK CROSS. BLACK SHIELD:
“… stomps out with thick Dixie riffs and moonshine barrel drums…there’s a British Sabbath slab of beef in its guts too, mainly via singer Marty Bohannon’s snide snarl. We’re not just talking trucks and shots of whiskey here. On the album, they can get faster and looser in turns. And the recording doesn’t get bogged down in any spoilsome tricks, so it feels fresh enough. But overall, yup, this is your morning cup of fringe ‘n’ long locks rock.” – CMJ
“…. a beautiful mess of rock and roll that commands your attention.” – DIFFUSER.FM
“Caught somewhere between Neil Young & Crazy Horse and Black Sabbath you have the Bohannons. The Chattanooga band dishes out tunes that are loaded with sludgy guitars, distortion and a hint of Southern soul. Their album Unaka Rising was the best damn record to come out of 2012 and from the sound of things to come 2015 is going to be a damn good year for the band.” – EXAMINER
[Rating 9.5/10 ] “Superb music that is in places reminiscent of Springsteen at its darkest or the brilliant shoulda-been-huge Philadelphia mob Marah… but dig deeper and Bohannon’s Black Cross, Black Shield just keeps on giving.” – MAXIMUM VOLUME MUSIC
“…a strong and powerful album that delivers on diversity and performances.” – THE NEWS HUB
“Black Cross. Black Shield is a bracing blast of post-punk guitar thunder, spiked with accents of country and blues. We dig the hell out of it.” – THE BIG TAKEVOVER
“… a monster of a record.” – FIRDAPOSTEN: NORWAY
“The Bohannons are back with a killer new album” – CHATTANOOGA PULSE