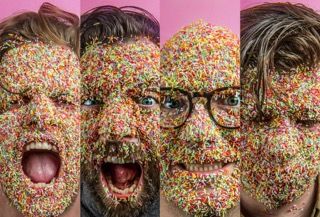 Adult to be released
Leeds’ noise-rock quartet Blacklisters have signed to Smalltown America their forthcoming album. Adult, recorded in Suburban Home Studios in Leeds with producer Matt Johnson, aka MJ of Hookworms will be released later this year. The label had the following to say:
‘We are delighted and humbled to announce that Blacklisters are joining the Smalltown America family. Over the past few years, the Leeds quartet have deservedly earned their reputation as one of the UK’s most confrontational and aggressive live acts. We are thrilled to welcome them to the label.  Forthcoming record ‘Adult’ is a typically uncompromising affair, riddled with the band’s trademark, dark humour. The album will be available this Autumn on all formats via our eStore.’
Since the release of their debut album in 2012, Blacklisters have headlined tours in the UK and Europe, been invited to support the likes of Scratch Acid, Pig Destroyer, Future of the Left, Pelican and Big Business, and recorded a live session at Maida Vale studios for the Radio 1 Rock Show, as well as appearing at festivals such as Live at Leeds, Camden Crawl, Dublin Crawl, Nass Fest, Hevy Fest, Damnation, Leeds and Reading Festival. The band stated:
“We are extremely happy to announce that we will be joining Small Town America to release our second album. Song tours, videos and stuff will come soon.”