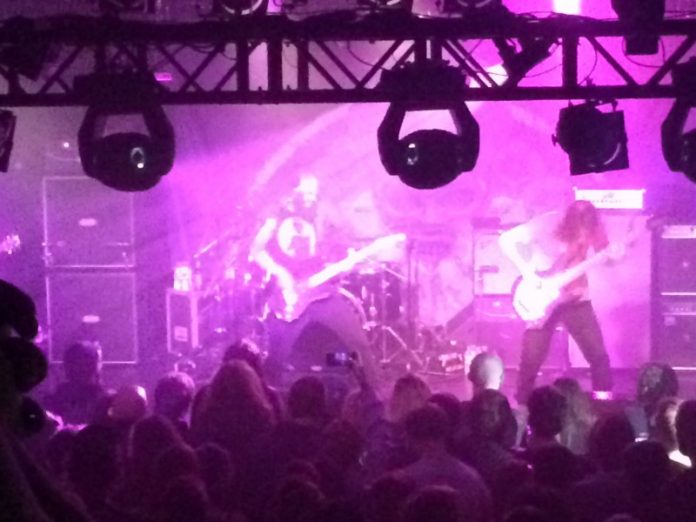 John and his technicolour dream band. Or something

It’s handy naming your albums after colours. It makes the lighting man’s job a lot easier, maybe that’s why Baroness do it?

Whatever the reason, when the titles of your albums are “The Red Album”, “The Blue Album” “Yellow And Green” (that one’s a double….) and “Purple” (which came out last December) there’s a definite visual prompt to let you know which its from – give or take a couple that are wrong if it’s from the latter then there’s purple hue to the stage and so on. Clever huh?

Tonight there’s lots of purple as it happens and plenty of yellow and green, because as frontman John Baizley points out “we are just glad to be here to play these new songs for you soon after release, rather than being here a couple of years late.”

Suitably for a man of so few onstage words, there’s a little bit more to it than that. Back in the summer of 2012, the “……Green” album was just about to come out when they played Birmingham last. Just a couple of weeks later the band were involved in a serious coach crash. Thankfully all survived, but two of their number couldn’t carry on with touring. When they were last here at all, some two and a half years ago, the new line up played a stellar set just up the road in Wolverhampton, but whilst no one is actually saying it, this is perhaps the first time that this edition of Baroness is feeling really at home and really firing on all cylinders.

And if perhaps that is reading to much into things, it is absolutely fair to say that for an hour and three quarters Baroness are at their spellbinding best. A band that relies just on the music – and the colours, obviously – they are not in the least showmen and there is no real spectacle here. What there is instead is a set full of stunning songs.

Tracks like “Shock Me”, which builds on its pulsing synths, the wonderful “Morning Star”, the urgency of “Kerosene” and the huge “Chlorine And Wine” are all welcome additions to the canon, and the “Yellow And Green” stuff is greeted like long lost family, and in particular “March To The Sea” is a reminder of the fact that it really was one of the albums of the year, while the twin guitars – which see Pete Adams to the fore – of the instrumental “The Green Theme” are some of the best this side of Thin Lizzy.

With all but one of “Purple” being played, and almost half of its predecessor, it’s hardly surprising that there’s not much room for old stuff. Just one makes the main set, “Blue’s” great slab of “The Gnashing”, while “Isak” is one of the encores. The other of the encore pair is the anthemic “Take My Bones Away”, which is now a singalong classic and a fitting end.

Just about the only other time Baizley opens his mouth to speak he says this: “the second show we played outside the U.S was in this city, and we’ll keep coming back.” That’s for the future, in the present it’s arguable that however many times they’ve played Birmingham before, they might never have been this good, and that can go up in lights.