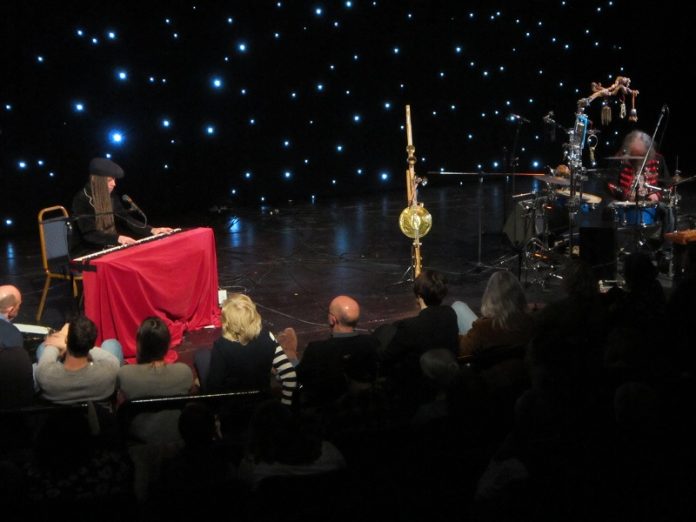 A unique folk and acoustic music festival at the Crescent Theatre

Crescent and Hobgoblin Music promoted this event showcasing 12 acts spread across two stages.The main stage had predominantly acts that had National and International acclaim and in the Bar Stage more local and emerging acts.

Edwina Hayes hails from Lancashire but now resides in East Yorkshire. She has been a special guest of Fairport Convention and indeed joined them, to sing vocals on “Who Knows Where The Time Goes”.As this was originally the remit of the late great Sandy Denny, this is a talented lady.

Edwina is not only an accomplished singer but a fairly good raconteur as well, telling stories about-  and singing cover numbers written by –  Ewan McColl with “Schooldays Over”, Richard Thompson’s “From Galway to Graceland” and Barbara Dixon’s “Caravan”.

There’s also some wonderful self-composed songs with “No Idea”, “Tell Me So”, “Nobody’s Coming Around” and “I Won’t say Your Name”. Another self-penned song to be enjoyed “Pour me a Drink” which was dedicated to her father, another narrator of tales and probably where this his daughter inherited her storytelling ability. The set was rounded off with a superb track called “Bend in the Road” written with the brilliant Boo Hewerdine.

The headline act this evening is Lisburn born troubadour Peter Wilson who goes by the name of  Duke Special. I have witnessed a few shows by this guy and you never know what to expect. Tonight was no different. After a few technical teething problems, we get underway.

Tonight we get a mixture of old sheet music songs, Duke’s own songs and covers, with some interesting ones thrown in for good measure. From the Duke’s extended catalogue there is “Nail on the Head”, “Freewheel”, “Wake Up Scarlett”, “Apple Jack” and the wonderful “Last Night I Nearly Died”.These are interspersed with sheet music songs such as “The Anniversary song” or” In Praise of death” , “Sweet Violets” which we were told was covered by Betty Driver, from Coronation Street and even the best cowboy ballad ever “Ghost Riders In The Sky”. This track was filled out with the wonderful percussionist Chip Bailey. Chip later on gets to accompany Duke with Cheese grinders and egg whisks, honestly.

There’s also a smattering of Ivor Cutler tunes “How Are You Shut Up” and “There’s A Turtle In My Soup” where the audience join in with the chorus of “out the old front door”. The attendees are by now not only encouraged to move down to the front of the auditorium but to sit on stage with the musicians.

The Brecht / Weill tune “Alabama Song” is shared before we are gifted a brand new song named “Leyna”And after they return for the encores, marvellous version of the Neil Young classic “Harvest Moon”

Our show is finished but we are asked what we would like as a final song. As luck would have it somebody shouted out to request fabulous “Our love goes deeper than this” This guy is a real music hall style vaudeville artist and puts on a superb show.

A special thanks must go out to Mary Groves, Peters Grandmother who encouraged her family to take up the piano and without whom the world would be a duller place. This was as much a theatrical show as well a musical gig. An evening in the company of  Duke Special is always a special night indeed.