Bloodstock Gets A Touch More Evil 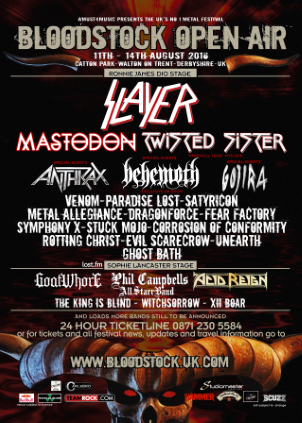 EVIL SCARECROW are delighted to announce they’re heading back to Bloodstock Festival this summer to play alongside the likes of Slayer, Mastodon, Twisted Sister, Corrosion of Conformity, Anthrax, Behemoth and many more.

If you were at the Bloodstock mainstage in 2014 you would have witnessed the breathtakingly bonkers brilliance of these guys playing to 10,000 people at 11am in the morning but if not, now’s your chance to witness it again!

There will no doubt be toys galore brought out to play including a certain 7 foot robot, and you can guarantee that a set chock full of metal, fun, ridiculous dance moves and a certain infamous crustacean will be forthcoming. Can’t blooming wait!!

Here are a few (rather excited) words from Dr Hell: “We’re back! Again! Mahahahaha. We’re like the Bloodstock house band, or maybe a bad STD that you just can’t get rid of. Either way we are totally pumped for this one and are hoping to bring our biggest ever show and even some new material. After the historic, record breaking crowd of 2014 we’re looking forward to being back on that stage, although a separate custom built floating glass pyramid Scarecrow Stage would have been nice. We are genuinely overwhelmed and beyond excited to be back partying with our Bloodstock brothers and sisters.”

After selling out the Camden Underworld, packing the Slade Rooms and then selling upwards of 1,000 tickets at Nottingham’s Rock City  & going mighty close to breaking all ‘walk up ticket sales’ records that night, Evil Scarecrow are delighted to announce some new shows coming up this spring: