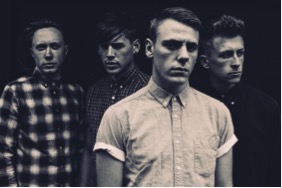 Explosive London four-piece MassMatiks, have released their debut single ‘Gunning For You’, ahead of an upcoming headline tour which will see the band criss-cross the country, playing 12 intimate dates including a London show at the Black Heart, Camden.

The single features in-yer-face riffs, infused with the groove and syncopated swagger of Rage Against The Machine and the band’s modern UK contemporaries, Slaves. Laced with lead singer George Peploe’s fiery British, invective-spitting vocals, ‘Gunning For You’ is set to inject a breath of fresh air into the UK music scene.

Of the single Peploe says, “’Gunning For You’ was written about a guy I knew who is all bark and no bite. He thinks he’s a hard gangster, telling everyone he wants to beat me up, but when he saw me in person he couldn’t even look me in the eye.”

MassMatiks have spent the last couple of years putting together their own tours, making their own videos and honing their song writing skills. Their incendiary live shows attracted interest from numerous management companies and they elected to go with Hall Or Nothing (Manic Street Preachers, The Script, The Horrors, Seafret, and more). A fresh batch of songs led to a recording session last year with Grammy-winning producer Jason Perry out of which came the sucker-punch, three-minute-wonder ‘Gunning For You’.

This is a true band of the people, oozing with raw honesty and not ones to lend themselves to a specific scene, sound or genre. With a raft of new music and a string of shows to come this year, they kick off 2016 this March at the following venues…