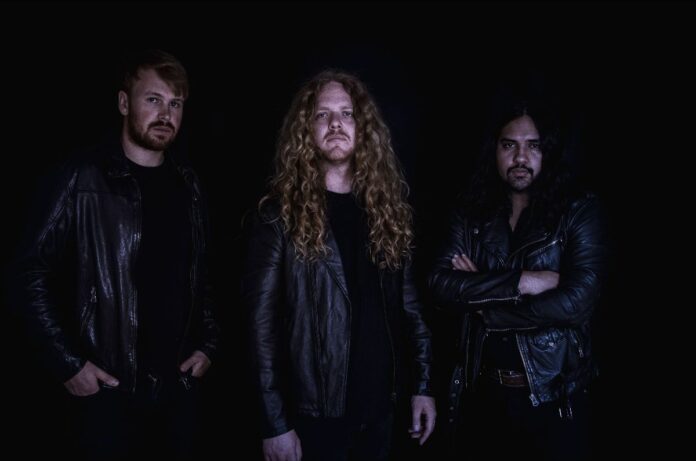 Swedish doom and groove merchants HAZEMAZE share a second track taken from their upcoming album “Blinded By The Wicked”, to be released on January 28th on Heavy Psych Sounds. Get ready for another headbang-worthy ritual with “Ceremonial Aspersion”…

As the pandemic progressed and the world got darker, so did HAZEMAZE‘s songwriting. Their third album “Blinded by the Wicked” explores cults and their leaders’ malevolent intentions that corrupt vulnerable people. The band has taken their dark thematics to the next level, delivering their most multifaceted, pulverizing and groove-infused album to date, describing it as “rock’n’doom”. “Blinded by the Wicked” was recorded by Timmy Ternestål at Studio Ingenstans in their hometown of Strängnäs, and mastered at Studio Humbucker by Robert Pehrsson (Death Breath, Dead Lord, Imperial State Electric). Listen to the previous single “In The Night of the Light, for the Dark“.
💀 Listen to new track “Ceremonial Aspersion” on Youtube 💀

About the song, Stefan Carillo comments: “Ceremonial Aspersion is a straight forward, bone-crushing Goatsnake-inspired doom hymn that opens up the B-side of our new record” Blinded by the Wicked”. The theme of song is inspired by the morbid and bizarre ritualistic acts within the infamous Australian cult “Satan’s children”. This is also the first song to incorporate a Hammond organ to emphasize the gloomy and ritualistic experience. “Ceremonial Aspersion” is a caravan of sabbathian riffs and it’s meant to be played at eleven.”
HAZEMAZE New album “Blinded By The Wicked”
Out January 28th on Heavy Psych Sounds