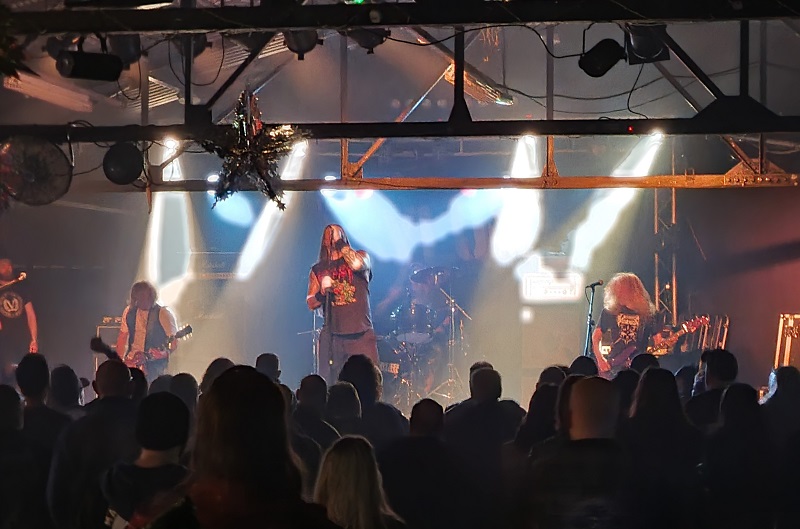 I’m not sure whether King Creature’s Dave Kellaway is psychic or not, but I’d written one word on my notes for their set: Power. Over to the singer/bassist to say, “this is our last song tonight, Birmingham, it’s called “Power”. I’m standing by it, however. Because when Jack Sutton-Bassett thunders his kit here, the vibrations go through the staging where MV is sat at the back. There are a few things I noticed on their records that are even clearer here, watching them play live for the first real time (I’d seen a couple of songs when KC opened for Phil Campbell a few years back) like, for one they stand apart from the UK competition. Bluesy hard rocking this is not. Instead, this is heavy. Check the thrash overtones to the drumming and there’s the occasional growl in the vocals. Yet there’s a melody too. The single “Desolation” or the highlight here “Falling Down Again” are the work of a band that could be anything it wanted. They’ve been meant to open for Orange Goblin on many cancelled tours in the last couple of years. it’s a shame, that these shows have come in the middle of such uncertainty and the crowd is down on what it might be as a result, but nothing can hide the quality and – that word one last time – power that King Creature have.

New bassist Harry Armstrong isn’t shy of a word or six throughout, but these are kind of the thread running through the set: “This might be the last time for ages we can get together, bang our heads and drink beer…. let’s do it shall we?”

With that Ben Ward – the man mountain who was born to front this band – roars “Red. Sky. Rising.” And they play it. If that sounds simple, then frankly that’s because it is. The beauty of Orange Goblin, for 27 years is their simplicity.

They do metal. But, whilst they know their history, they don’t do the gallop of Maiden, Priest and Saxon. They’ve got Joe Hoare to do riffs. Big, thick, meaty riffs. They do slabs of guitar with thumping hooks. And that’s it. And the drums Chris Turner does, are like being beaten.

Even though this tour sees them without founding member Martyn Millard for the first time on stage they’ve got two things in their favour that put them above just about all the competition: 1) their songs are utterly sensational 2) they love it as much as anyone ever has.

If ever there was a band that gives off the vibe of being the sort of fellas if they weren’t on stage would be down there, drinking beers and banging their heads, then its these four.

This should have been their 25th anniversary tour, two years ago, and the setlist has something from every album they’ve done.

And for an hour and half, almost, they are as good as anyone could possibly be.

“Scorpionica” is a hell of an opener, and “The Filthy And The Few” is one of the finest songs of the last decade, it really is.

The band seems to be happy anyone is there at all, given the circumstances, and when they do “Stand For Something” it seems to underline everything they are. Orange Goblin are the underground. They are the outsiders. The torchbearers.

Ward wanders down to the front row to see his people in “Acid Trial”, and frankly, whatever he tells you to do, you’d best do it. That one, though switches gear in the set too. “Some You Win, Some You Lose” is one of those that you can’t get out of your head, even if you wanted to, and “They Came Back (Harvest Of Skulls)” ends up being arguably the highlight of the whole thing.

“Sons Of Salem” signals the end of the set – except it doesn’t. This is the bit where we are meant to go off and you say ‘come back Orange Goblin’ like its Alan Partridge, shall we just do three songs instead?” enquires Ward, and those three that are left are little short of magnificent. “The Devils Whip” is a biker anthem that early Almighty would be proud of, “Quincy The Pigboy” has never let anyone down, ever, (and they are joined by two blokes I assume from the support bands with boxes on their heads for this one, the ‘why” is never explained, its perhaps best not to ask) and then there’s “….Rising”.

I’ve been going to gigs for 30 years – even before Orange Goblin formed – and there’s nothing better than turning up to watch a band you love and remembering exactly why you loved them in the first place. That, in a nutshell, is what happened tonight. And that’s why live music matters so, so much.