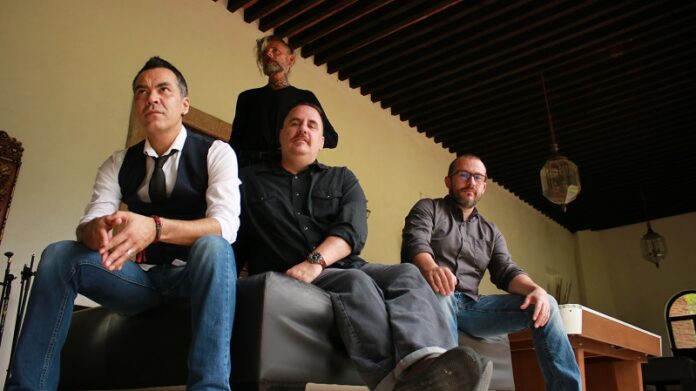 Vocalist Tobias Hawkins is known for being the original drummer of legendary rock group Counting Crows, and over the years has also played with groups including Laundry (Tim Alexander from Primus) and The Girlfriend Experience.  Bassist Cristian Hernandez, spent much of the early 2000’s touring in the notable rock group Onesidezero, before going behind the scenes and working professionally with LA producers David Bottrill and Ulrich Wild. Guitarist David Rodriguez is from the Bajio, Mexico region (along with Cristian Hernandez). Drummer Arthur McConnell recently joined the group, who has played with popular Bay Area groups like The New UP and Felsen and has professionally toured as a session drummer for over 2 decades.

The members and longtime friends are from both the United States and Mexico, with Hernandez and Rodriguez being from Celaya and Hawkins and McConnell being from Northern California and Boston respectively. They have a shared passion for 90’s alternative rock, the creativity of 80’s melodic groups and underground sounds including shoegaze and art rock. “Pearl” and the majority of the upcoming album was co-produced and engineered by both Sylvia Massy Massy and Cristian Hernandez in a small villa in Mexico over the past year. Faint On Call not only produces a wall of sound, but has dynamic and emotion both instrumentally and with Hawkins’s haunting, yet beautiful voice that pulls the listener to another level.

About Faint On Call:

Faint On Call is a band born in lockdown, a hybrid sound between 90’s alternative shoegaze post grunge and late 80’s melody driven rock. It’s that familiar feeling of having heard these songs before but not being able to pinpoint exactly where and when. The hooks and chunky hypnotic layers match perfectly with the heavy, yet hopeful, visual lyrics that could only have come from the dark downtimes of Covid 19 isolation.

The founding members, Tobias Hawkins, Cristian Hernandez and Arthur McConnell challenged each other’s songwriting abilities in a daily trudge through music apps and emails during 12 months over 2020 and 2021. Tobias: “I got a text one evening from my old pal Art, a drummer, asking if I would be willing to record some vocals on a track one of his friends had created. All I had to do was download an app onto my iPhone and join in the fun. I was frustrated with the shelter-in-place policy we were living in, because of the pandemic. It had meant the end of live performances and the end of work for me as a musician. So, I went with it, excited I would be making music again even if it was online.