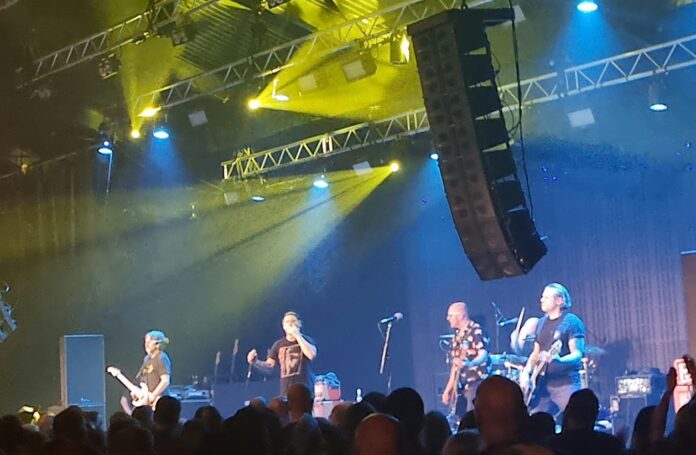 When you watch Massive Wagons – now chart stars, by the way, “Triggered” their new record is in the Top 10 – you can’t help but smile.

This is the case for a few reasons: first, they are infectious, they carry you along with them in the way that all the best bands do. Second, they have some truly fabulous songs. But here’s the main thing. They are a beacon of hope for us all. They are the band that came from the underground (the same is true of Stone Broken) and by dint of their own hard work and being too good to be ignored they got to the big time.

As such, this set, like every set of theirs is a celebration. Of rock n roll, of life, of positivity. It sort of has to be when you’ve got Baz Mills as your frontman. A dervish. A force of nature. Like he’d take it as a personal affront if you weren’t having a good time.

This is a co-headline show, both bands get an hour and ten minutes and credit to Massive Wagons for packing their slot with tracks from the new record. Out for a week, the title track, “A.S.S.H.O.L.E”, “Germ” and “Fuck The Haters” have fitted in perfectly already. Adam Thistlethwaite, who along with Mills formed the band, is a fine guitarist too, and his riffs carry old favourites (as we must call them at this point) “Bangin’ On Your Stereo”, “Fee Fi Fo Fum” and “China Plates”. But its “Back To The Stack” that most hits home. The bit where they sing a tribute to Rick Parfitt:  “raise a toast to Rick cos I am raising mine”,  and you realise that these are just fans, like everyone else in here, just that they got to sing that with Status Quo a few years ago.

The five piece realise how fortunate (not lucky, you make your own luck) they are, you can tell that by the energy in songs like “Generation Prime” or “Ratio” (“I don’t know what this is about, never did, but people like it, so we keep playing it” says Mills) and at the end, when they play “In It Together” you feel like they mean it. Unlike some slogan from a political party, this is the truth.

Massive Wagons, the band named after a local barmaid in Lancaster now belong to everyone, but after their set, what do they do? Retreat backstage to their rider? Not a chance, instead Baz appears and poses for selfies and has a chat with anyone who wants one. And if ever there’s a band you wish well its this one. A shining example of what hard work and talent can do.

Sometimes, it all comes down to this:

“And if you think this might be bringing me down/Look again ’cause I ain’t wearing no frown!/Get down!”

You probably know that lyric (let’s be honest, if you don’t know “Everything About You” by Ugly Kid Joe, you’re probably reading the wrong review), but its more than the mega hit here. It’s the vibe. It’s the ethos. It has been for 30 years.

Rewind to about 9.45pm. UKJ are about halfway through “Neighbor” – their third song – when the power everywhere in the venue goes. Most bands might leave the stage, some I’ve seen might have a hissy fit, not these boys. No, they carry on with the song with the drums and the crowd singing. They then do “Busy Bee” in the same way before the lights come back on, the Marshall stacks fire back up and we resume, “nothing can stop us!!” screams singer Whit Crane and he’s got a point.

In town because they’ve just released “The Rad Wings Of Destiny” (can’t imagine why they were excited to meet KK Downing backstage….) they’d opened with its first track “That Ain’t Livin’”, but by and large this is a mix of their whole career.

Joined by Chris Catalyst (of the wonderful Eureka Machines) this is a band that have  – at the core – been together a long time. That chemistry between Crane and guitarist Klaus Eichstadt is evident,  and “V.I.P” sounds way fresher than a song that is 30 years old should.

Everything back to normal, you can’t disguise the power in “Panhandlin’ Prince” and the likes, and it strikes you just how they were able to regroup so seamlessly for their comeback EP “Stairway To Hell” with “Devils Paradise” and “No One Survives”.

That’s a decade ago, now and their momentum shows no sign of slowing down. Indeed, why would it? When they’ve always been able to do it so well: “Milkman’s Son” and “Goddamn Devil” is your proof. That they precede these oldies with a new one, “Failure” is not lost on MV. They all have the same class.

A band that has always chucked in plenty of covers (their version of “Cat’s In The Cradle” is played as ever), the end is a case in point. “Lola” (also on “….Destiny”, “Dirty Deeds, Done Dirt Cheap” (for which they are joined by Baz from Massive Wagons, with the camaraderie between the bands evident) and “Ace Of Spades” are three of the closing four, with the aforementioned mega hit sandwiched in between.

Some might wonder why that was, but doesn’t that miss the point? The point, surely comes in what Crane said at the end: “thank you for celebrating rock n roll, with us!” he’d exclaimed, and since 1991 all Ugly Kid Joe have ever wanted to do is make people smile, provide an escape, for us and probably them too. Job, very much, done in that case.