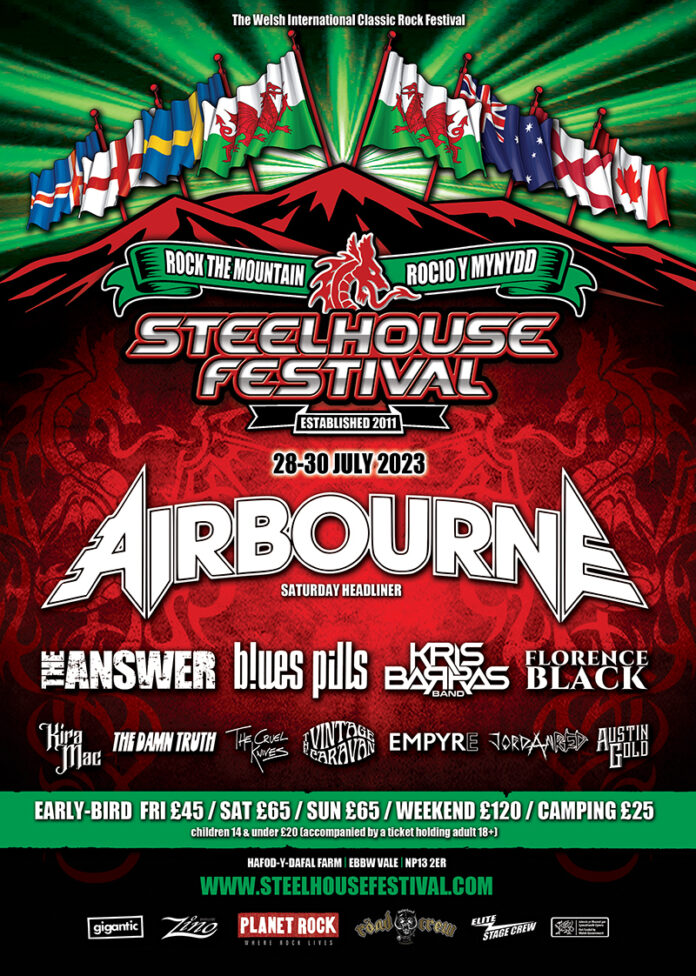 Steelhouse Festival are elated to announce that the Saturday headliners for the 28-30 July 2023 weekend are now in place. Australian hard-rockers Airbourne are confirmed to make their Steelhouse debut, in their only UK festival show of 2023. With more truly exciting announcements still coming down the track, we also already have more incredible bands locked in right now, including Friday headliners Kris Barras, plus The Answer, Blues Pills, Florence Black, The Vintage Caravan, The Damn Truth, Austin Gold, Kira Mac, Empyre, The Cruel Knives and Jordan Red.

Over a decade has passed since the inaugural Steelhouse in 2011, and the Festival at the top of the mountain boasts not only the best views of any UK rock event but one of the most passionate, friendly and loyal followings. With a reputation for not only bringing in the biggest and best names from the international world of Rock, Steelhouse also understands the role it can play in throwing open its prestigious stage to the best of the new breed of bands. It all adds up to a compelling mix of classic and cutting edge, old and new, near and far –  in this announcement alone we have acts from Australia, Canada, Sweden, Northern Ireland, Iceland, England and the Steelhouse homeland of Wales.

Airbourne said, “Wales! What’s crackin!! Are ya ready to rock or what!! We’ve bloody missed you! We’re pumped to finally get our arses back up your way to rock your mighty Steelhouse! Tons of great bands on the bill, it’s gonna be a great summer weekend of boozin’ good times and Rock’n’Roll, can’t wait for it! See ya in July Welsh rockers!! Rock’n’Roll TO THE F*****’ MAX!!!”

Promoters Max Rhead and Mikey Evans said, “Australia – one of the hardest rocking countries on Earth…Its fine lineage of world-class artists is legendary, especially those whose names begin with the letter ‘A’!  And with that, we are so proud to bring Warrnambool, Victoria’s finest rock n roll machine, Airbourne to South Wales next summer… Theirs is a show that, in the greatest Antipodean tradition, carries maximum high-voltage, full-tilt, blood, guts and thunder… Everything is left on the stage. Their Steelhouse debut heads up this first round of announcements which is heavy on talent from around the globe. Canada’s The Damn Truth and Icelandic trio The Vintage Caravan also make their first trips up The Mountain whilst SH2023 sees the welcome return of Sweden’s Blues Pills and Northern Ireland’s, The Answer. Add to that the very best new talent from England as well as our very own local lads – the German stadium-strutting Merthyr massive, Florence Black, we’ve got a bill that rocks hard and that gathers the best of international talent in July 2023. There is a lot more to come, including another international, globally renowned artist who’ll be making their first Steelhouse headline appearance…

So, once again let’s get ready to Rocio y Mynydd / Rock the Mountain!“