ARTIST OF THE DAY: PHARIS AND JASON ROMERO 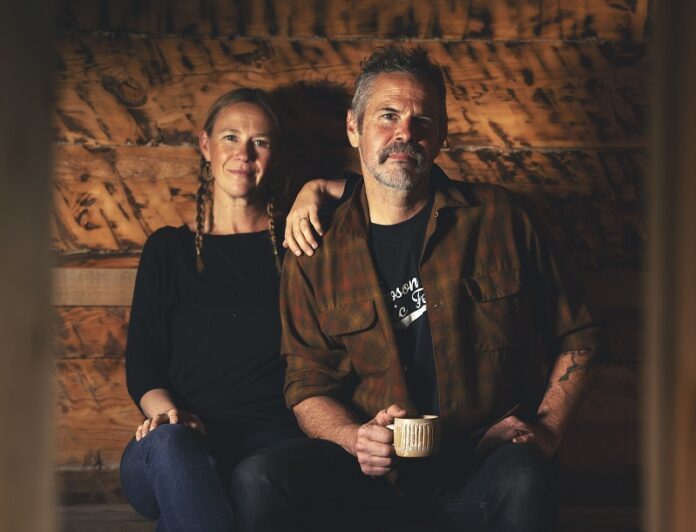 Pharis and Jason Romero—whose old-time, country-folk, and early roots music has made them three-time Juno Award and seven-time Canadian Folk Music Award winners—have announced the release of their new album, Tell ‘Em You Were Gold, out 17 June 2022 on Smithsonian Folkways Recordings. It’s Pharis and Jason’s seventh album as a duo, and the first since 2020’s Bet on Love, which won praise from the BBC and NPR; American Songwriter said, “To call Bet on Love anything other than masterful would be a disservice.”

Tell ‘Em You Were Gold was written and recorded in an old barn on the couple’s homestead in Horsefly, British Columbia. The barn had long been run down, and between building banjos, adventuring outdoors, and loving up their two kids, Pharis and Jason restored the building themselves, milling their own spruce, hoisting beams, and rebuilding a roof originally covered in tin printing plates. “The music made on this record was made in the spirit of that working transformation and in the spirit of the history that old barn contains,” they write in the album’s liner notes.

Making things by hand comes naturally to the pair: Jason has long been a highly regarded banjo-maker whose designs expand the instrument’s expressive range while respecting both its mechanical history and the music it’s frequently been used to make. Jason plays seven different banjos on the album, and Pharis plays one gourd banjo guitar—all handmade by Jason in his shop.

Album opener ‘Souvenir’ and ‘Pale Morning’ are out now, the former landing alongside a music video, and despite its place in the tracklisting, Pharis reveals “Souvenir” came together on the final day of recording.

“The banjo and guitar vibe changed as soon as we sat down to play it. Jason retuned the banjo and switched from clawhammer to a rhythmic fingerstyle; I slowed the guitar down and played heavy on the downbeat. A couple takes in, and the song sat where you hear it now,” she shares with us. “The words are about how experiences in life become souvenirs of times, places and people. It’s about keeping yourself centred as you carry them. In other words, the souvenirs don’t become you – you are at the core of them, and you are gold.”

Nearly half of Tell ‘Em You Were Gold‘s 16 songs are in the public domain, but the two make sure to note whose versions have informed their own. The duo’s take on “Train on the Island” takes inspiration from the work of Tom Sauber and Mark Graham, among others, but Jason’s delicate touch—he plays three-finger style with no picks on the song—makes his virtuosity feel gentle and companionable, and contributes to the track’s incredible warmth.

Pharis’ lyrics shine with wisdom that’s hard won and love that’s kindly offered. “We’re always older than yesterday, but I don’t change and you won’t stay,” she sings in “Sour Queen.” The song is a showcase for her voice, too: She pushes it higher, nearly breaking it into a yodel while Jason chases the melody downward behind her. Pharis grew up in rural British Columbia singing in her family’s folk-country band, playing in the creek, and falling for ’60s folk revival and bluegrass records, and throughout Tell ‘Em You Were Gold, she sings with a sweetness that never feels like affectation.

What shines through the brightest on Tell ‘Em You Were Gold is the sense of joy that Pharis and Jason have playing with one another and with their friends. They’re joined by fiddlers Grace Forrest and Trent Freeman, pedal steel player Marc Jenkins, bassist Patrick Metzger, and John Reischman on mandolin. You can hear it in the way Jenkins’ pedal steel slides like liquid among the wiry picking of “The Dose,” or in the contented exhales of “SS Radiant,” a sweet solo banjo meditation dedicated to the duo’s son Sy. Even “Been All Around This World,” a rambling song Pharis and Jason each sang before they met and sing together here, feels quiet, at rest, like it’s arrived—like they’ve been around the world, but they’re here now, and there’s no place they’d rather be than at home together.
Tell ‘Em You Were Gold is out June 17th on Smithsonian Folkways Recordings