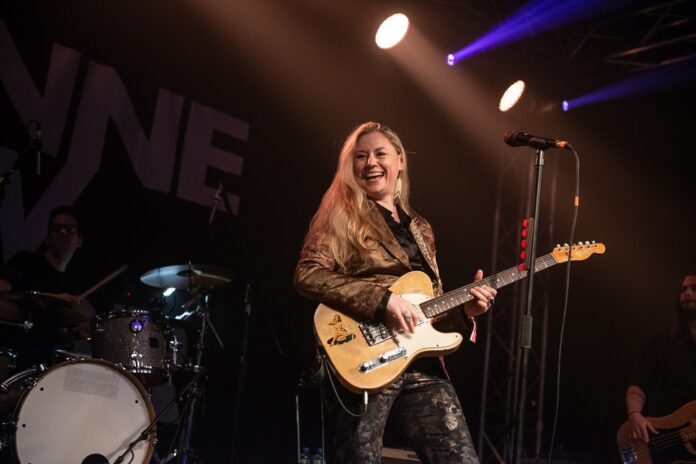 Later in the evening, in her set, Joanne Shaw Taylor encourages the crowd to “put your hands together for the future, Mr. Toby Lee”. It’s not just the usual platitude, given that it is abundantly clear that the teenager has talent to burn. It’s more than that with the Londoner, though. There’s a confidence and – dare I say it  – a maturity about him that you don’t often get. There’s a blues root to what he does, but “Take The Wheel” is the perfect example of how he’s of he’s not wedded to one style, given that it is a raucous CCR style slice of southern sound. It’s “The Search For Happiness”, though that acts as the centrepiece of his set, a solo that straight out of the Alan Nimmo King King playbook shines a light on this most incredible talent, but also underlines just how well he’s chosen his band. Guitarist Olly, bassist Tom and drummer Wayne provide a foundation for Lee to do what he does and do so in fine style. A short set, it ends with “It Could Be So Easy” (apt given how easy they make it look) but its enough to say that what you’ve witnessed is a little more than an emerging talent. History is littered with blues guitarists that emerged to great fanfare and rather fizzled out, but there’s every reason to think that Toby Lee is not another for that list, nor is he one for the future. On this evidence he’s just fine right now.

I am not sure how long the post-pandemic glow is going to last, but its not worn off yet. Time and time again tonight, Joanne Shaw Taylor stands on the lip of the stage to play a solo and she’s grinning. Not a fake one, either, but the one of someone who is back doing what she loves to do. “It’s hard work,” she says halfway through, “not the same as being in your bedroom practicing.”

During the pandemic (“in between watching The Sopranos and Downton Abbey five times” as she puts it) JST got together with her friend Joe Bonamassa and producer Josh Smith to craft a fabulous album of blues covers. Most of it is played here tonight, and in an interesting move, the eight covers are reeled off one after the other.

She and her fabulous band – Michael Bradford is her perfect foil on guitar and Dorian Ford on keys has given a new dimension – are evidently confident in the new material (well might they be given that it has given her a first Blues Chart topper) and “Stop Messin’ ‘Round” is a wonderful opener.

That one, the likes of “If That Ain’t A Reason” and “Can’t See What You’re Doing To Me” are right from the top drawer, indeed the band knows it too, you only have to look at their faces when it’s being played.

Perhaps the best one is “Two Time My Lovin’” as they take the Fabulous Thunderbirds track (“great song, terrible message”, jokes JST) and make it their own, but “Let Me Down Easy” which acts as a vehicle to remind how good Shaw Taylor’s voice is rather than her guitar is not far behind.

It’s easy to lose track at just how long Joanne Shaw Taylor has been doing this, and how experienced she is, and consequently just how many superb songs she has of her own. The second half the gig rectifies that as the (relatively) locally born artist cherry picks some of her finest stuff.

This includes a quite brilliant “Love Is Just Another Word”, but its bass player Steve Lahane that anchors this one down so well, while older stuff like “Let It Burn” I’d argue has never sounded better than it does here with the 2022 version playing it.

“Mud, Honey” still sounds as good now as it did eight years ago or so – and the jam the band plays straight after is one of an outfit right on top of its game – as does “Bad Love”, which even in an all-seated show like this one is so much fun.

They go right back to the start of her career for “Going Home” in the encore, and its perhaps time to reflect that at one point it was Joanne Shaw Taylor who was in the position of Toby Lee and the teenage blues sensation.

That is a long time ago, but here twenty odd years later, she gave a timely reminder on how to maintain a career and to re-invent as you do so – and she’s perhaps never looked happier or more comfortable.