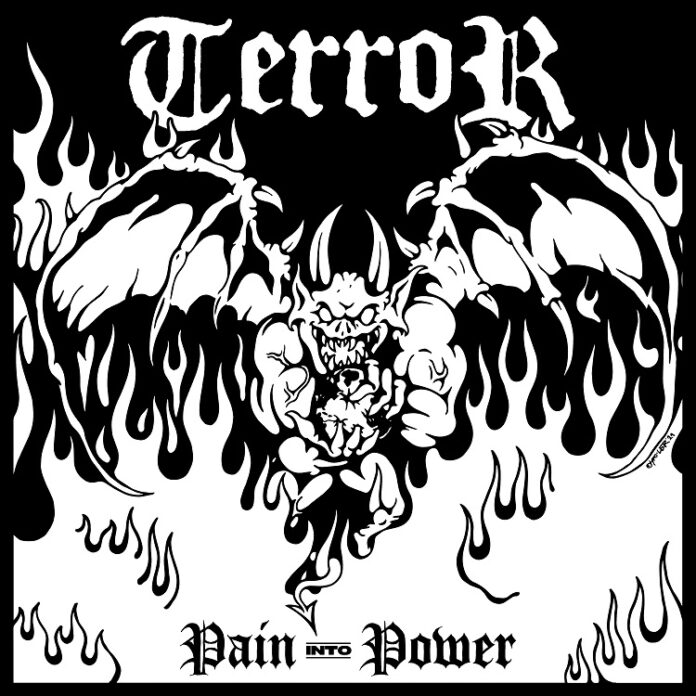 Reviewing Terror records  – I’ll be honest here – is a piece of cake. Granted, that cake would be laced with barbed wire, and have a broken glass topping, but still.

See, for two decades, Terror have been unrelenting, unflinching and perhaps the heaviest of all the hardcore bands, and “Pain Into Power” is no different.

At least on the surface, anyway. Because “….Power” is actually heavier and more diverse than most. Original guitarist Todd Jones is back. Scott Vogel, the bands “singer”, asked him at the start of the lockdown to collaborate again, and he did, producing the album and adding vocals to “The Hardest Truth”.

As ever, a Terror record is about feeling, tone and visceral anger. The title track kicks (apt phrase) off in customary fashion, with the band reaffirming its commitment to both Hardcore, but also the power of positivity across 53 seconds of maelstrom.

Indeed, it is astonishing for a band that on the surface is so violent , so heavy and so extreme that the lyrics are so positive. The power of positive thinking to get us all through the bad times is a central tenet of what they do, and on “Unashamed” Vogel thunders that “I believe in the power of brotherhood”. Fittingly, he does this with Year of The Knife’s Madison Watkins and Initiate’s Crystal Pak. Two of the newer bands in hardcore, this might be seen as a passing of the torch as it were, except that Terror have so much to say. “Boundless Contempt” is veritable prog rock here, given that it passes two minutes, but my goodness, the power in the music, the thunder in the rhythm section (founder member Nick Jett is a phenomenal drummer and whatever bass man Chris Linkovich got paid here it wasn’t enough). “Outside The Lies” – which opines that “we’ve been thrown away by the ones we love” as a first line, is an abyss of despair for 40 odd seconds, before “One Thousand Lies” rather blurs the lines between thrash and hardcore in the way bands used to (especially on the West Coast as opposed to the New York scene).

“Can’t Let It Go” is something of an anthem – and I guess if you aren’t angry in 2022 then you have lost all hope – but “Can’t Help But Hate” is perhaps the proof you are dealing with a special (in all senses of the word) band with Terror. Corpsegrinder from Cannibal Corpse joins the chorus here and it’s astonishing just how heavy this band is.

“On The Verge Of Violence” (and this record is at all times) surveys society and wonders how we’ve been failed so badly as a populace. They are talking about LA but it could be over here too. “We hate each other, because we hate ourselves” is a telling and important line. Especially given that the song before it – the aforementioned “…Truth” had gone strong on mental health issues.

“Prepare For The Worst” begins with a riff with more melody than some, but reaffirms the message: “all you have is yourself” and but there’s always the thought that the music, the hardcore scene if you will, will help you through. That’s the thing that has most informed Terror’s music for two decades and is actually one of the reasons they remain so important.

“Pain Into Power” is a twenty minute study into violence, but it is more. On one hand it is like being bludgeoned with a concrete block. Repeatedly and very fast, on the other, it is about empowerment and is incredibly thoughtful. There is no band like Terror, when all is said and done. They’ve never made a bad record.  This, though, is a very good one and one that documents existence as well as anything will in 2022.