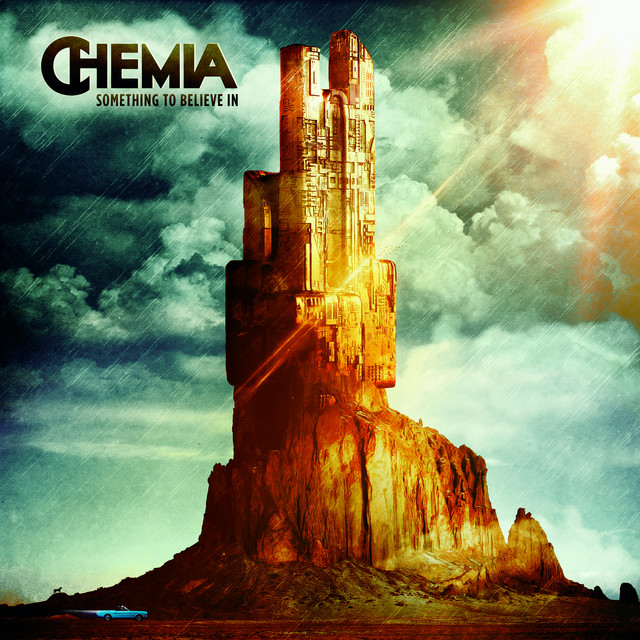 Warsaw-based rock band Chemia have just released their latest album ‘Something To Believe In’ which was produced by Andy Taylor [Duran Duran, The Power Station], who also worked with the band on the lyrics. It`s the follow up to their 2015 release `Let Me`. The band have undergone sone line-up changes and now comprise singer Lukasz (Luke) Drapala, founding member guitarist Wojtek “W” Balczun, Maciek ‘Papay’ Papalski on guitar, bass player Błażej Chochorowski and Adam Kram on drums. The word Chemia means Chemistry,” explains guitarist Wojtek “W” Balczun. “It is all about exploring, nurturing, and discovering our musical chemistry as a band and how we interact with each other as musicians and how this also resonates with audiences too. I guess our goal is like that of the best alchemists to try to create something extremely unique special from our music. Often with music it needs creative triggers and some ‘Je ne sais quoi’ to help inspire the writing process.”

The album opens with ‘The New Romance’ with a kind of Marc Bolan and T Rex vibe leading us in and it`s a cracking introduction to this band and is wonderfully all over the place. It has some introspective moments then a blistering twanging bass line which gives it a bit of an edge then it becomes more melodic and ends up much more of an anthemic offering. Wonderfully eclectic. We have a delightful rock out chorus and heavy riffs on `The Widows Soul` which at times is wonderfully melodic and up there with stuff put out by bands such as FM and Thunder. It was maybe a spiritual reflection or just a musing on life and that phrase “carpe diem” or to seize the day. A real anthemic foot tapper / head thumper of a track with an easy-going nonchalant relaxed guitar riff in the latter section.

`Modern Times` begins gently with a guitar riff and uttered vocals then evolves into a bluesy slow burn with some pounding drums, guitar riffs, a leading bass line and percussion in the form of handclaps. The chorus harmonies of “Modern Times” will stick with you and have you murmuring it for the rest of the day. The lyrics seem to imply something uncertain coming on the horizon and it does translate through to the music. We have a ballad in `The Best Thing` which opens with a harmonica, strummed acoustic guitar and vocals. A love song or a recognition of somebody in your life that is always there for you and brings the best out of you. A number that will have the phones and cigarette lighters illuminating an arena when shared live i`m sure.

`Angina` which is a chest pain caused by reduced blood flow to the heart muscles, not usually life threatening but a warning sign that you could be at risk follows and it`s possibly a metaphor for the hurt of lying in a friendship or romantic liaison. It has that Led Zep `Kashmir` Middle Eastern hint at the beginning and throughout and ebbs and flows with a larger than life orchestral feel. Stunning. Title track `‘Something To Believe In’ races along and to me had a funky sensibility to it with the vocal rapidly shared and sprinkled over the top of the captivating musical backdrop.

I felt `Blood Money` had a similar funky feel and again was a pretty fast paced submission. A track that Living Colour would love to have in their repertoire. The Americana tinged `Tumbleweed` opened with some intricate guitar chords and harmonica and what sounded like a steel guitar. It almost paints a picture of driving or riding through a desert like setting or landscape, superbly evocative.

`Beneath The Water Line` is a little different. We have some quite complex guitar chords, a throbbing bass, pounding drums, vocals, and harmonies that sound quite pained or tortured at times. It`s a number that I found myself being almost sucked into and was over before I realised it. At times it reminded me of Soundgarden for some reason, maybe the almost introspective nature of it. The album closes out with the kind of upbeat `Eagles Of The City` a number that sways from having some churning guitar riffs to become a little more anthemic almost ballad like at times as it soared along. A little different but no less enticing.

After absorbing myself in Chemia`s latest composition, I can understand how they have been offered slots to open for acts like Guns ‘n Roses, Skindred, Billy Talent, Deep Purple, Bring Me The Horizon, Red Hot Chilli Peppers and were the only Polish act to play at Sonisphere Festival in Warsaw; headlined by Metallica.

The band have a real social conscience and have redirected their efforts from music to helping coordinate the efforts to support the refugees heading for sanctuary in Poland. This being said, the band have agreed to waive 25% of the income from the album and single sales and donate to the Polish-Ukrainian Institute of Assistance and Development.

Another further reason to invest in this magnificent release.