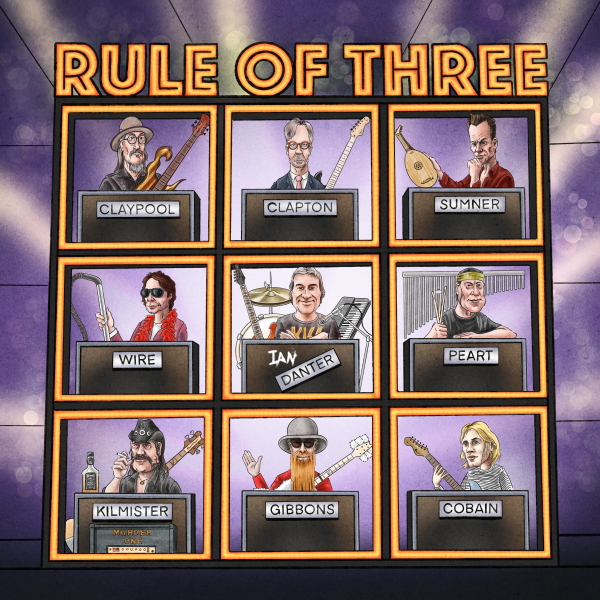 Acclaimed hard rock songwriter, multi-instrumentalist and UK broadcaster Ian Danter is finally set to bring out his follow up album to 2015’s “Second Time Around” with a brand new collection of original rock songs entitled “Rule Of Three”.

Recording initially began in July 2019 at the famed Monnow Valley studios in Monmouth, South Wales, with Ian once again playing almost all of the instruments and singing lead vocals as with his first 2 albums.

The 2020 pandemic suspended operations for a time but by mid 2021, all recording was finally completed at studios in Blackpool & Llanelli

They include Wayward Sons’ Sam Wood and Chris Buck from Buck & Evans/Cardinal Black, as well as Ettrick himself and Ian’s guitar cohorts from his theatre rock project “Leather and Lace” in Jon Sudbury and Glenn Quinn. Quinn also contributes a co-write to the album (along with Ian) with the epic “Generation Z”.

Ian’s long time best friend Keith Laurent also supplies a fun tune in “I’ve Got A Problem” that dates back to the band he and Ian formed as teenagers back in Birmingham during the mid 1980’s.

Songs like “One Over The Eight” and “Route Of All Evil” combine Ettrick’s punchy riffs with Ian’s inventive melodies and lyrics, whilst Ian himself wrote other standout tracks such as “Pick A Side” and the swirling, exquisite ballad “Landscapes”.

Ian took the “Rule Of Three” title for this 3rd solo release and devised a fun cover artwork with designer Shaun Davies, based on the Hollywood Squares (US) or Celebrity Squares (UK) quiz show, with Ian in caricature surrounded by famous musicians who all had a ‘rule of three’ of their own with regard to famous band lineups.

Ian, a well known football commentator on talkSPORT radio – and a regular Planet Rock presenter too – said of the album, “The inspiration for it came from revisiting some collaborations that Gray and I had when writing songs in the 90’s. He always has a stash of great riff ideas that he’s adding to this day and listening to some of his recent ideas fired my imagination to compose new songs and dust down one or two old tracks that never got released”.

Ian spent over 5 years as ‘Peter Criss’ in the worlds longest running KISS tribute band Dressed To Kill, touring the UK and Europe from 2005-10 during his main spell – plus the occasional sporadic return in future years as a ‘dep’ drummer

To further engage with his past, Ian began the recording process for “Rule Of Three” in a famous studio where he cut his teeth some years before. “It was a real thrill to return to Monnow Valley to record my drum parts at a legendary place I’d not worked in for a quarter of a century.

“Similarly to then complete the album and mix it with the wonderful Tim Hamill at Sonic One in Llanelli – a studio I’d never worked in previously – was hugely rewarding for me in getting the sounds and the vibe I could hear in my head.

“‘Rule Of Three’ feels different to my first 2 albums for the collaborative effort alone in terms of songwriting and construction, but sonically I think Tim has captured a rawer, more aggressive sound to the instruments and as a consequence this album feels really direct and unambiguous in its approach.

“Lyrically, I’ve once again tried not to stray into the clichéd rock stereotypes of girls and sex, but one or two songs are meant to have that sense of fun and joie de vivre like ‘One Over The Eight’ or ‘I Was There’ whilst still being lyrically stimulating”

“Rule Of Three” is set for release on CD-digipak and online on June 3rd 2022.