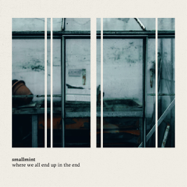 smallmint are a collective of musicians hailing from various parts of Northern Ireland. Their debut album `Where We All End Up In The End` is released this month and is flecked with spatters of alt-rock, Americana, and folk amongst a handful of pop, bluegrass, and country influences. The band comprise of Andrew Cameron-Braithwaite (vocals, guitars, percussion), Michael Henderson (drums, backing vocals, guitars), Christopher McKay (electric guitars) and Michael Wilson (bass guitars).

`Amity` introduces us to the album and opens with a swirling church like organ, a shook tambourine and a constant guitar chord riff as vocals and drums join in to lead us along. The meaning of Amity is friendship or friendly relations between nations but I couldn`t quite make out what was being shared lyrically. Nevertheless, it`s a quite anthemic melodic slice of indie pop with some harmonic melodies. We have in `Synonym` a song that tackles the idea of being “a good or bad person,” says frontman Andrew Cameron-Braithwaite. “I feel like most people like to think of themselves as inherently good deep down, so with this song I approached it from the opposite angle, admitting my shortcomings and saying out in the open that I have done wrong things, things that are objectively perceived as bad.” It`s a quite brief noisy outing with some churning grinding guitar riffs.

`The Radiator` has a much more Americana texture about it and becomes fairly mesmeric as it progresses. A radiator is a thing that emanates or emits light, heat, or sound, and this track certainly does. The band have shared that `Liv` is “a song for those who struggle to see the good things that are happening right before their eyes. A reminder to not always be waiting for that certain moment – thinking that happiness will be achieved once a specific milestone is reached, or when a certain event takes place in your life,” I have to say I really enjoyed this submission which was pretty reflective come introspective and had some charming guitar chords throughout and a really captivating drum highlight towards the end with tapped drum rims adding to the  overall ambience of this thoughtful piece.

`The Swell` is a quite hypnotic almost stripped back composition initially which allows the singer`s rich vocal to really shine. It becomes much more expansive with the addition of drums and some delightful guitar chords and grows in volume as it evolves. There`s a superb guitar solo towards the end and it was a track I found wonderfully engaging and played a fair few times before moving on. I have to say I found `Devoid` was anything but wanting or barren. A quite noisy not aggressive but fairly assertive challenging slice of indie rock.

`Pseudonym`  is a slightly odd offering with a repetitive guitar chord and them a drum that adds a similar feel. A number that you feel will take off but it doesn`t, slightly strange but quite compelling. We have in `No Shelter` a track that addresses the concept of faith, as well as the uncertainties of life and it does seem to have a slight edgy feel to it.

The penultimate tune `The Highway` is pretty ethereal and dreamy. A number that seemed to almost wash over me. The album closes with `The Dark` and it`s a more uplifting anthemic quite rocky piece where the bass really leads us along. It has some churning riffs and again is a number that will really draw you in but does take a bit of a detour or curve for a couple of minutes midway through as it quietens down to allow the vocals to glisten before reverting to a more noisy rock out and fading with twinkling piano keys.  .

`Where We All End Up In The End` is a quite enjoyable listen and serves up a variety of styles during it`s thirty odd minute duration. The band had additional input from Beulah Kim (backing vocals), Caolán Austin (organs)  and Fionn Crossan (handclaps).

There`s plenty here to whet your appetite and allow you to search for more to come from smallmint.