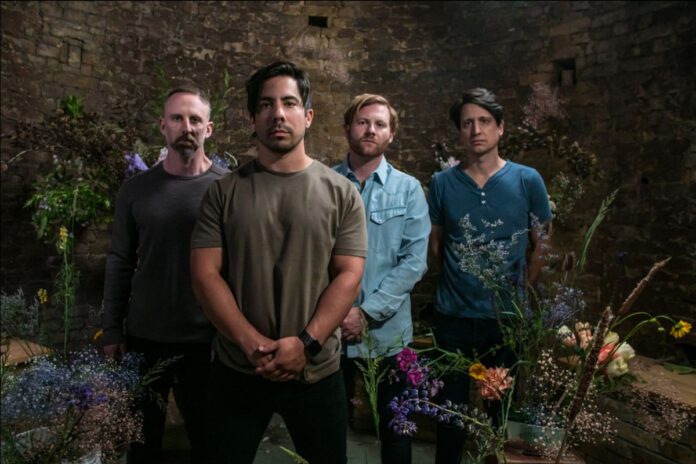 Armor for Sleep have released their first piece of new music in 15 years. ‘How Far Apart’ comes as the first single and music video to be released from newly announced upcoming album The Rain Museum, due for release 9th September via Rude Records (UK/EU) and Equal Vision Records (ROW).

Watch the music video to ‘How Far Apart’ here: https://youtu.be/VrOpydSX_mg

It’s been almost 20 years since the release of Armor For Sleep‘s seminal full-length, What To Do When You Are Dead, but the album still resonates with much of the band’s fanbase. ‘How Far Apart’ is an evocative anthem that’ll leave a heavy feeling in the pit of your stomach through lead singer Ben Jorgensen‘s belting lyrics, “you used to be my home, I found you in my bones”.

‘How Far Apart’ is full of the emotive, hard-hitting drums and reverb-soaked guitars that were so
pivotal to the success of What To Do When You Are Dead, but with the maturity you’d
would expect from an artist of Jorgensen‘s calibre after years of refining his craft. It serves
as a perfect introduction to what fans can expect on the band’s upcoming full-length,
The Rain Museum.

For the official music video, Armor For Sleep tapped director Jesse Korman (Hot Water Music, The Juliana Theory), for a collaboration that yielded an emotionally-gripping tale of a life lived in reverse. The visual is cinematically beautiful and complex, matching the intensity of the track in lock-step. The band have always been celebrated for the cohesiveness of their releases – from narrative to artwork to videos – and this visual once again lives up to that high standard of creativity.

“We are very excited to share our new album, The Rain Museum. Back in 2020, at
the start of the pandemic and at the start of our collective lockdown, I made it my mission to finish
writing a concept album that had been in my mind for many years but was never able to bring to life.
The Rain Museum was initially a short story I wrote many years ago about a post-apocalyptic
Earth and a mysterious museum in the middle of the desert. Weaving the story into an album was
going to be my quarantine project. Unfortunately, my marriage of nearly eight years and basically
my entire life fell apart as I was beginning the writing process. The one thing I had in my life to
divert my attention from what I was going through was the creative process of writing that album. But because I couldn’t ignore what I was going through personally, I wound up writing about myself and what I was going through and putting that into the story of the album and into the world I had been creating for this concept record. In the end, it’s an album about facing some of the most painful parts of being human and how lost we can get. I just hope it will speak to people going through their own dark times, as my favourite art certainly helped me get through mine.”

‘How Far Apart’ is the first single from The Rain Museum, the band’s upcoming full- length that is 17 years in the making. It’s a concept album built around a post-apocalyptic world where weather no longer exists on planet Earth and people come to a mysterious museum in the middle of the desert to look back on what life used to be like. Originally planned as the follow up to What to Do When You Are Dead, the album had been shelved due to “bad advice” leading the band in another direction. Fast forward to the global pandemic of 2020, and the events of the real world encouraged Jorgensen to revisit the concept. The result is a beautiful and devastating 12 song collection that draws upon the best elements of Armor For Sleep‘s catalogue while incorporating elevated song-writing and composition. After a fifteen year absence from the studio, The Rain Museum will undoubtedly prove to be well-worth the wait for old and new fans alike.