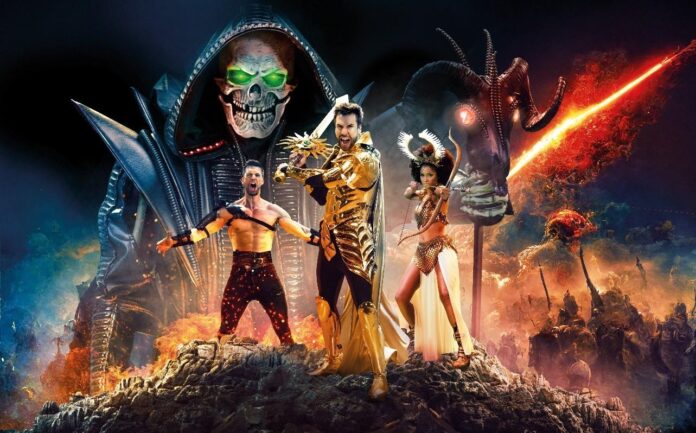 The first chapter of the warriors’ glorious return can be heard on the debut album, ANGUS McSIX and the Sword of Power.

While riding on the back of a Pegasus, head-bopping techno beats and synth-waves are abound on “Ride to Hell“. Driven by mighty harmonies and striking rhythms, Angus draws “Sixcalibur”, the Sword of Power, to open the sealed gate of hell. Catchy guitar solos underline the sword’s powerful capability of gaining higher levels each time an enemy is killed by its blade. “Master of the Universe” continues the epic adventure and marks the comeback of ANGUS McSIX as he returns from the abyss. Euphoric and energetic melodies mingle with his legendary powerful vocals. The portal does lead Angus back to Scotland, but directly to the dawn of time. After the glorious warrior defeats an invasion of hellish “Fireflies of Doom“, the dwellers of the Holy Dwarven Empire of Dundee provide him the “Laser-Shooting Dinosaur”, set to music in the energetic and catchy party track, reminiscent of the good old 8-bit video game days. As the last hope for this world, Angus is now to ride to the northern islands of Stenness to discover the secret of his own destiny…

ANGUS McSIX and the Sword of Power marks the mighty return of Thomas Winkler to the world of glorious power metal hymns and chant-along party tracks. As the former face of Gloryhammer for over a decade, ANGUS McSIX took no time to pause, building up his name across genres borders as one of the best entertainers in the metal scene with several guest appearances on projects like Nanowar Of Steel’s “Valhalleluja” and Feuerschwanz‘s “Warriors Of The World United”. With ANGUS McSIX, he and his new allies and enemies are now ready to fight the biggest battles of the universe!
ANGUS McSIX live on festivals 2023
09.06.23 NL – Leeuwarden / Into the Grave Festival 2023
17.06.23 DN – Copenhagen / Copenhell Festival 2023
05.07.23 DE – Ballenstedt / Rockharz 2023
13.07.23 DE – Neukirchen-Vluyn / DONG Open Air 2023
15.07.23 CZ – Vizovice / Masters of Rock 2023
05.08.23 DE – Wacken / Wacken Open Air 2023
12.08.23 ES – Villena / Leyendas del Rock 2023

Previous article
FUSS OVER NOTHING
Next article
ONE, LOUDER