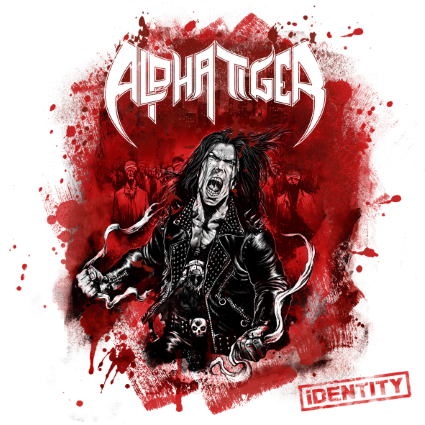 When they burst out of their cage at the beginning of this decade it was assumed that Alpha Tiger were some kind of trad metal revivalists.

Not so, they tried to assure us. Second album “Beneath The Surface” emerged the following year and saw them try to move into different areas.

In the build up to this, their third, they reckon that journey continues. They do have a point. On tracks like “Lady Liberty” which opens “iDentity” after a short instrumental intro, the galloping, horns up metal is still all present and correct, but a little later on “Scripted Reality” for example, while it’s still rooted in metal they have found their feet – and dare we say – their own individual reality a touch more.

This is a journey they continue as the record goes on. “A Long Way Out Of Redemption” adds a modern, sheen to things and wraps the whole thing around a hook that Avenged Sevenfold would be proud of.

The title track, with it’s Machine Gun drumming, breakdowns and keyboard swathes is perhaps the best thing on here, but the simple, yet anthemic “Revolution In Progress” runs it close, beginning with a huge solo and building from there.

Elsewhere “Closer Than Yesterday” brings to mind initially a sort of rocked up “That’s The Way It Is” by Bruce Hornsby And The Range, before actually becoming an almost Journey-esque power ballad.

They are back to cocksure and strident before the end, though and “Shut Up And Think” rattles around at a million miles an hour, before closing track “This World Will Burn” hints at that dreaded word “maturity.”

“iDentity” as a whole marks a giant leap forward for Alpha Tiger as the band roars along the way to finding it’s own sound while staying true it their heroes.

The sound of a band finding it’s place in the world.