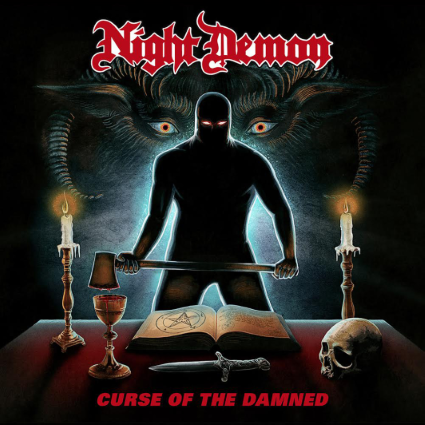 US Trio bring back the Old-Skool on debut release

There are times when you listen to this, the debut record from three heavy metal herbert’s from Ventura, California, when you actually have to check it isn’t a reissue from the golden age of NWOBHM.

Let’s just say from the get-go “Curse Of The Damned” wears it’s influences on it’s studded sleeves, this is the sound of Maiden, of Priest, of Saxon and Diamond Head as imagined from across the pond. “Screams In The Night” hurtles out of the blocks at a million miles an hour, the title track is only missing a Halford style scream and when you call a song of this type “Satan” then you best believe he’s coming for your soul – what else?

At it’s best when it’s balls out, full throttle rocking, as on “Full Speed Ahead” …..”Damned” is carried high by its sheer – and apparently genuine – love for the genre.

It is absolutely steadfast in its trad metal beliefs, so that even the haunting opening to “The Howling Man” is merely an excuse for another gallop, and “Heavy Metal Heat” doesn’t leave anything to the imagination, while “Mastermind” couldn’t be any more “Doctor Doctor” by UFO if it tried.

If you expect flagging before the end then you would be wrong, “Killer” screeches into view most pleasingly and the record’s most lengthy – over five minutes – track “Save Me Now” hints that they are in this for long-haul.

A few years ago we were all told there was a NWOBHM revival in the offing. Despite the best efforts of outfits like White Wizzard and Holy Grail it never quite happened. Well, the genres Metal Gods aren’t immortal and even Eddie can’t run to the hills forever.

Someone has to come from the pack. Night Demon are as good a place as any to start the search.