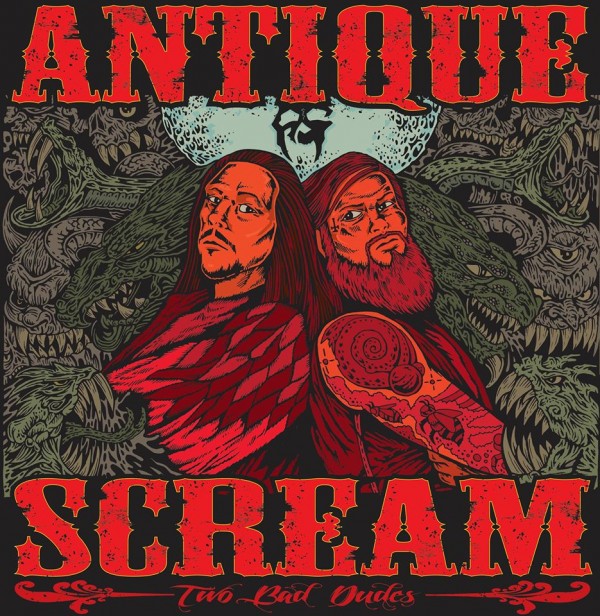 We’ve said it before and we’ll say it again, but there is something seriously weird about two piece bands.

From The White Stripes to The Graveltones, your duo is just a little bit more off the wall than a fully fleshed out band.

Take Antique Scream. This is ostensibly (and very loosely) fuzzed up, dirty blues, but there is something just a little bit more primal than that going on.

Deeply rooted in the late 1960’s “Two Bad Dudes” is a concept album. Set into five parts, but don’t ask us what the hell it’s about. Not that the band seem to care. Side two opens with – “Black Magic 1” which after a funky start, turns into a drum solo, not only because it can, but as the band proudly explain to replicate “the ketamine and morphing addled brain they expect the listener to posses by that point.”

There must be something strange in the water of the mountain states where these two – Christopher Rutledge on guitar and vocals and William Fees on drums – hail from. Partly from Seattle and Phoenix, because this is an extremely odd record in places.

It begins in rather understated fashion with “Golden Goddess Part 1” and it ends with “The Chronicles of Dirty Dick” but in between it takes some very dark twists and turns. “Golden Goddess Part Two” for example features a chorus of “you and me and the Devil makes three” and you can only surmise at what strange alchemy is being concocted here amongst its Doors’ type stylings.

“No Control” is a fine song. Part old blues, part Elvis after dropping acid, while “Harsh Mistress” is almost mournful in its delivery. “Thee Intimidator” is a little more chaotic and all the better for it, and one which you suspect would be superb in a live setting.

In their homeland Antique Scream are apparently never off the road and actually, that might be their natural habitat. In a small dark, club these jams (word intentionally used – as it seems that these tracks may have happened organically rather than by any planning) would rattle the walls.

The sound of a band who truly appears not to care less for any modern trends, Antique Scream, if not quite priceless, are a fine relic.