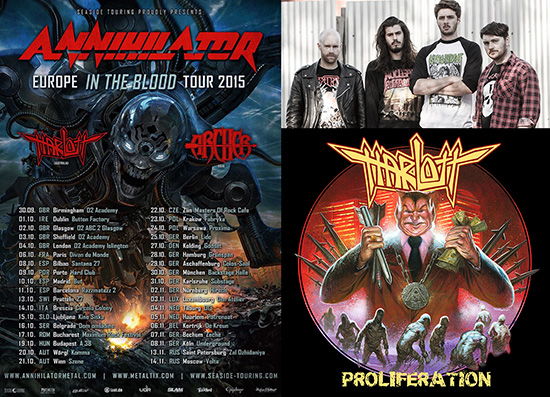 Metal Blade Records is excited to announcing the signing of Australian thrash metal act,HARLOTT! Forged in the eastern suburbs of Melbourne, Australia, HARLOTT are the finest example of the thrash metal genre in recent years. Taking their influence from the 80’s Bay Area thrash scene, and blending it with the Teutonic melody and grit, they focus on high energy, up tempo music with lyrical influence from war, religion, chaos, and the human condition. Unrivaled live concerts, an aggressive recognizable sound, clinical musicianship, and a classic ‘Aussie’ sense of humour have earned HARLOTT a strong and dedicated fan base, which continues to grow day to day.

HARLOTT‘s debut release ‘Origin‘ blew audiences away with its unrelenting speed, ferocious sound, and hook driven riffs, and did much to solidify HARLOTT as an up and coming force to be reckoned with. The four piece thrash outfit followed with a national tour, a string of Australian Heavy Metal Festival performances and a handful of support positions, including Germany’s Accept and Megadeth’s very own Dave Ellefson.

Their follow up release ‘Proliferation‘ only proves that the band means business, and could not only match their own fury, but even surpass it.

Check out the 1st single ‘Denature‘ at metalblade.com/harlott. White you’re there, check out the pre-order section where you can order ‘Proliferation‘ on CD, vinyl, or digitally!

The band comments: “Harlott are extremely excited to be signing on with METAL BLADE for the worldwide release of Proliferation. METAL BLADE have worked with some of the most important and influential Heavy Metal bands of all time, and we feel absolutely privileged to have the opportunity of engaging with such dedicated persons from a record company that has been so vital to the history of our music.”

HARLOTT are hungry for the World, and in October 2015, they will be dominating Europe with Canada’s Annihilator, the first step in what is to be a long and grueling career in total devastation!