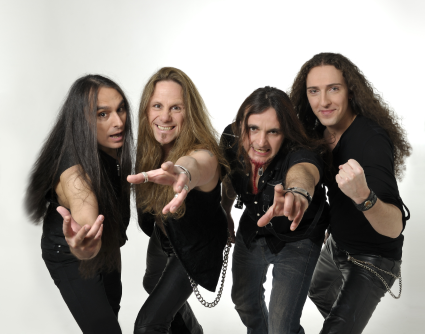 Freedom Call, Germany’s premier Melodic Metal band, are set to re-release their landmark album ‘Eternity’ as a very special edition double DigiPak CD, on April 27th on Steamhammer / SPV, 666 weeks after its original genesis in 2002. In celebration of this ‘hellish’ anniversary, ‘Eternity’ has been completely re-mastered, and comes with a host of bonus material, including nine different versions of songs on ‘Eternity’, a brand new studio track ‘666 Weeks Beyond Eternity’, plus a 16 page booklet. Furthermore, the album has been repackaged in a brand new cover and artwork, created by Jens Reinhold (Evergrey, Virgin Steele, Kingdom Come), based on the original sleeve design by Paul A. Gregory (Saxon).

Immediately following the release, Freedom Call embark on a European tour as special guests of Sonata Arctica, calling in to the UK to play London 02 Islington Academy on May 1st.

After unleashing their highly rated studio album ‘Beyond’ in February 2014, Freedom Call set off on their ‘Light Over The Beyond’ tour round Europe, dropping in to the UK to headline London’s Barfly on March 22nd. Record Collector’s Joe Geesin reviewed the gig in the June 2014 issue, stating that “The Barfly was heaving to the rafters for Germany’s Freedom Call, more used to playing major venues. The new line-up fronted by guitarist vocalist Chris Bray still offer power metal at its most uplifting, opener ‘Union Of The Strong’ (from the new ‘Beyond’, embodying their trademark vocal harmonies and twin guitars. After 15 years, it’s hard to believe that they aren’t better known, tracks from their debut ‘Stairway to Fairyland’ (notably ‘We Are One’) mixing perfectly with the latest opus, its title track standing out. Other highlights included ‘Farewell’ and the epic ‘The Quest’, complete with piano intro. The 75 minute set entertained from start to finish, warranting much greater exposure.”

‘Beyond’, which marked the return of founding member, bassist Ilker Ersin, and the addition of drum wizard Ramy Ali, was awarded 8/10 by Powerplay’s Sam Khaneka, who stated in the March 2014 issue that “In the way that only Freedom Call can manage, the entirety of their latest, ‘Beyond’, exudes joy like nothing else, with elation essentially being the theme of every song. Sure, there are a couple of moments where the band delve into a slightly heavier mindset, not least on the storming ‘Heart Of A Warrior’, but then ‘heavy’ by the Call’s standards is still ridiculously upbeat…Of particular note is the fact that Freedom Call have attempted to move out of their comfort zone with a title track stretching close to eight minutes in length, there’s just enough stylistic variation to the arrangement to keep it interesting – even if it’s not quite as immediately captivating as the rest of the album. On the other hand, ‘Dance Of The Devil’ shows the band channeling a slightly culturally-infused rhythm, with the result being a track that sounds like a heavy metal version of The Lion King. It’s a real highlight, and both songs add a slightly different element to an album of solid and unabashedly upbeat power metal.”