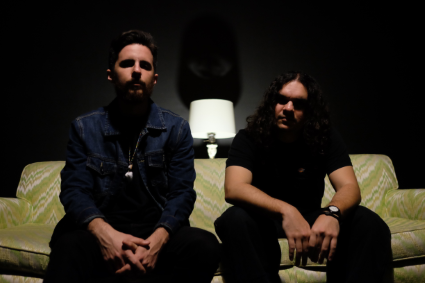 New album out in May

Miami-based Progressive Metal Duo CAVE OF SWIMMERS will self-release new album Reflection May 4.  Having made one hell of a racket in the Florida scene, the virtuosic tandem of GE Perez and Toro are set to inspire the world metal community with their blend of progressive metal, fusion, and Latin styles, even including some operatic flair for good measure. CAVE OF SWIMMERS’ intricate and flawlessly composed music has an awe-inspiring effect, leaving audiences stunned that such a massive sound could be orchestrated by only two musicians. With an intuitive and playful style reminiscent of the great jam bands of previous decades, CAVE OF SWIMMERS have been described as a “truly progressive” outfit by Destructive Music.

Originally from Venezuela, GE and Toro have been jamming together in various projects since their teens. After making the leap to America, it was a Moog pedal synthesizer that finally drew everything together. Since their first show at the iconic Churchill’s Pub in Miami, they have toured throughout the Eastern region of the US, enjoyed opening slots for national headliners, and developed a very devoted and passionate fan base.  In the end, what these two dudes bring is heart and soul to their shows, and of course some seriously honest, pure, unadulterated rock n’ roll.