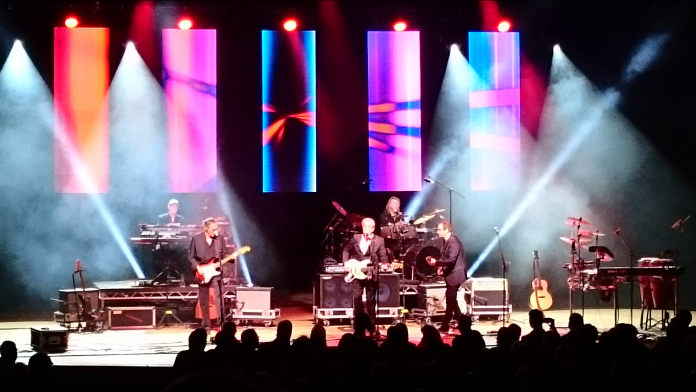 Garry gets down with some legends.

An early start on a Monday evening at the wonderful setting of Birmingham’s Symphony Hall caught quite a few folk out as many were still filing in during the first few songs of the 10cc set, those who arrived late took a double take as they glanced at the stage to see the band members, usually smartly attired dressed in jeans, t-shirts and trainers, but this was just the first set of the evening.

The band had opted for the two set evening to accommodate the whole of the ‘Sheet Music’ album…..a wonderful collection of music that highlighted just how far ahead of their time the members of 10cc were…..the magical ‘Wall Street Shuffle’ kicked off proceedings followed by tracks such as ‘Hotel’, ‘Old Wild Men’, ‘Silly Love’ and the stunning ‘Oh Effendi’…..this 40min segment of the show was a rare treat it has to be said.

The band returned after a 15min break dressed in black jackets & trousers to crank out a greatest hits set of the highest order….’Things We Do For Love’ got the set under way followed by ‘Good Morning Judge’, ‘I’m Mandy Fly Me’, ‘The Dean And I’, ‘Life Is A Minestrone’ and the utterly wonderful ‘Art For Arts Sake’…..but for those of us who’ve seen the band before knew what was coming next, and as a major Prog fan who has a penchant for a long track or two the roller coaster epic ‘Feel The Benefits’ just about ticked every box for me personally.

As we neared the end of the set it was time to wheel out one of the most famous songs of all time….has there been a ‘Greatest Love Songs’ compilation in the last 40 years that ‘I’m Not In Love’ hasn’t been included on? And what a song it is…..it’s the kind of songwriting masterclass that still sounds as fresh today as when it was released back in 1975, then it was the time of the show to ask such questions as do you love Cricket, Reggae and Jamaica….of course the answer to all was…..we love them, the brilliant ‘Dreadlock Holiday’ closed the set to rapturous applause from an audience who had been a little on the inanimate side throughout.

The band returned for an encore including an Accapella version of the bands first hit from 1972 ‘Donna’ which was followed by the raucous set closer ‘Rubber Bullets’….if you’ve never seen 10cc in concert before them I urge you to add them to your ‘one to see’ list……Messrs Gouldman, and his multi talented band of musicians Fenn, Wilson, Burgess and Hayman put on a magnificent show packed with hit after hit, and for a band that’s been around for over 40 years and gone through a few line up changes….they are a real treat to see live….I will catch them once again next time around, I advise you to do the same……do we like 10cc?